birds : Looking back to last Sunday, I made a brief mid-afternoon excursion to Bulwer Avenue where a Snow Bunting has taken up residence on the grass by the seafront. As is often the case with this species, I scanned the grass all along the bay with no success only to discover the bird was actually scrabbling around in the dirt at my feet. I was hoping to photograph it but as I was extracting my gear a couple of old giffers decided that I wasn't allowed to and chased the bird away with their dog.

The other main bird of interest this week was on the beach at Rousse on Thursday morning. It was a Herring-type gull that stood out from the others because it had a very obvious dark eye.

It seemed to be a full adult bird but it didn't have the typical pale yellow iris of a Herring Gull. Through the scope it was a brown colour and made the bird quite distinctive. Very few species of large gull have dark eyes and this is a common feature of Caspian Gull. But I never really got the feeling it was a "Caspo" as it didn't have the jizz that I'd expect. It wasn't lanky - its legs were short and its bill was not remarkable. Its mantle was not a different shade of grey and it was pretty small overall. The bill colouration though was good for Caspian - quite a pale yellow with a black band.

I waited until I got a snap of the wing pattern before I had to continue to work. Although the wingtip showed some white tongues (!) it wasn't quite right I don't think - and it only had one white mirror.

This was either an unusually dark-eyed Herring Gull - the Gulls book says that less than 1 in 5000 Herring Gulls have dark eyes - or it was an odd hybrid between races. There is some chance it could be Caspian but I don't have the expertise having never knowingly seen the species before.

Brent Goose, Rousse - this individual seems to be shunning the local flocks and seems to be wintering alone in Grandes Havres

moths : I finally managed to confirm that the putative Sombre Brocade that I had last year (see photo on 12th Oct entry) was indeed one. The photo below proves that it was a male of that species.

Also whilst studying this, I finally worked out what my microscope reminded me of . . . 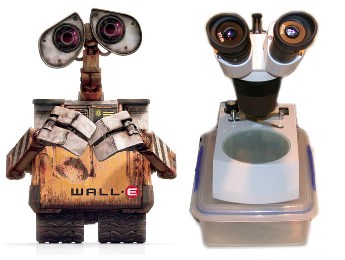 nonsense : Recently, an idea popped into my head and I made an "advert" for my buddies at the Bubo Listing website (see full version here). It seems to have been very popular and Birdwatch magazine liked it so much they put it on their website.

birds : Half-term week has been rather pedestrian bird-wise. Just busy doing other things mainly, but also having a cold hasn't given me much enthusiasm to get out and about. Early in the week I had a couple of dark Buzzards drift high NE over the house and a Slavonian Grebe in Grandes Rocques Bay. I have made about 4 attempts to see the Glaucous Gull at Mont Cuet Rubbish Tip and I finally saw it today amongst the rabid hordes devouring the island's putrified crap.

A gathering of gulls on the rocks at Chouet, backed by a dark malevolent sky

Late morning today I had a wander round the Track Marais (or St. Sampsons Marais). This is the least-disturbed open marshland on the island and would produce more good birds if it wasn't so tricky to get visit - I had to squeeze through a fence, hurdle a stream and climb through barbed wire.

marshland at the Track Marais

It is the most reliable site for wintering Reed Bunting on the island and I soon saw a single female bird perched on a bush. There were plenty of duck present today, with 33 Teal, 6 Shoveler and 2 Gadwall noted. It is also a good place for Jack Snipe but flushing them is hit and miss - I only flushed 4 Common Snipe and a Water Rail today.

nonsense : The Winter Olympics has been on TV quite a bit this week but even though I like sports, it is difficult to summon up any enthusiam for it. I am not a fan of minority sports in general, because you know that really the Olympic speed-skating, or ski-jumping, or luge champion is not actually the best in the world at that sport because only 0.000001% of the world's population have ever tried it. Whereas the 100m sprint running champion will be the fastest in the world, and the top footballers will be the best in the world, because everyone has run or kicked a ball before. I'm sure the competitors have worked really hard but that's just the way it is. However, saying all this, in the pub last night we decided that the Russian women's Curling team were worthy of our support !! [N.B. - Of interest, the "Skeleton Bob" event was actually named after the 19th Century pirate who invented it].

Tuesday was Abigail's 9th birthday and I was very proud of my first foray into the world of cake decorating. 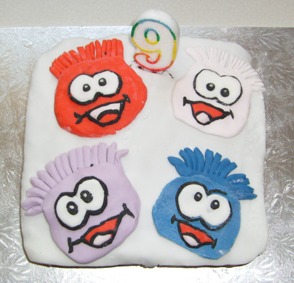 For some cracking Cake decorating disasters, check out the "Cake Wrecks" website

birds : It has been much the same this week with little new arriving. There are still plenty of winter thrushes in the fields but numbers of other winter birds are already falling. I did manage to finally see the Water Pipit at Fort le Crocq for the year list, plus a Guillemot that was clearly in trouble in Grandes Havres, as it seemed to be able to flap just one wing as it was surrounded by gulls. The Buzzards are now very visible around the central valleys as they prepare for the breeding season - hopefully we can prove breeding this year.

If you look closely at the female-type wagtail above, it has a bright pink ring on its leg, part of a UK colour-ringing project. The other rings were caked in mud so I couldn't see the combination and they never stand still long-enough anyway. I know that they do a lot of colour-ringing of wagtails at Slapton in Devon, and since this is the closest part of the UK to here, I suspect that it will be one of those birds.

I received the latest Birding World this week and was pleased to see my 2 page article on the Pacific Diver - my first ever article published in Birding World.

moths : Whilst gardening I discovered a caterpillar under some palm leaves. It wasn't fully-grown, which makes the id somewhat more difficult but I think it was an Angle Shades larva, a common species in the garden.

birds : With another 2 Mistle Thrushes noted in the Fauxquets Valley on Wednesday, that makes 7 birds in the last month, which is pretty good to say I'd only seen one bird in the last two years. It would be nice to think that some of these birds will stay to boost the almost-extinct local breeding population but they will no doubt return to Eastern Europe whence no doubt they came.

A beautiful adult Med Gull was with the other gulls on the beach at Rousse on Friday and 4 Great Crested Grebes were together in Belle Greve Bay at high tide today.

The best sighting though was the Great Spotted Woodpecker which flew over the Cambridge Park trees about 10 minutes into the football match I was playing in. It must have been a good omen as we won for the first time since October against one of the top teams. I've only seen Great Spotted Woodpecker 3 times previously in Guernsey but now that they have started to breed here, I suspect they will become more regular.

nonsense : Just recently, I had a parents evening. It flies by fine when you are actually talking to the parents, but the dead time between appointments is a real killer, sitting there like a plank, watching the clock tick slower and slower. I occupy myself doing this . . . .

I was quite pleased by this sketch - its belly and rear end is a bit wrong but I liked the head. I wish I had time to do more drawing but I simply haven't - you can't do everything. One of the parents asked me if they could take this sketch home with them, but it was on the back of my notes about the children. I also had a few other musings about parents evenings - see below.

birds : Popped out at lunchtime today and there was a little cluster of birds at the East end of the Reservoir. On the water there were 3 male and 3 female Tufted Duck - never has this been number 3 on my Aythya year list! A Water Rail appeared in the reeds and three Snipe landed in amongst the brambles on the water's edge. Up on the ploughed field overlooking the water, there were plenty of Fieldfares and Redwing, along with 2 Mistle Thrushes together. Also there was a confiding Golden Plover which I could have taken better photos of if I hadn't had to get back to bloody work. Altogether, a very pleasing half hour.

moths : A bit of microscope work last night revealed the tortrix of 12 Jan was indeed an Acleris umbrana - a new species for the garden.

nonsense : must dash - a Chinese awaits and then its onto Gentleman's Club for the evening . . .