birds : Rain, rain, rain! It's not even thinking of stopping at the moment. It has rained on 26 of the 28 days this month apparently and often heavy. Every time I've had a thought of popping out for a bit of birding at lunchtimes it has been teeming down. I have checked the bays from the car but nothing doing. The most notable bird item was at school on Friday when I noticed a Rabbit on the playing fields. I pointed it out to Dan and Chris, then Maddie came in and showed her year 7 class, who all came to look at it out of the window. I said under my breath "I wouldn't have done that if I were you - I've a feeling those gulls are gonna peck its eyes out!". No sooner had I said it than a Great Black-backed Gull strolled over to the dopey bunny, picked it up in its bill and hurled in in the air. The girl's "awwwws" soon turned into terrified squeals as they witnessed the anticipated bloodbath. Dan and I ran out in the pouring rain and scared the gulls off and luckily the rabbit was still alive, although clearly quite "mixi". The Animal Shelter took it away and we were temporary heroes.

With my new improved Photoshop skills I have recently started to convert my old slides to digital. There are probably more professional ways of doing it but I am placing the slide on a piece of white perspex on top of my microscope base which has the bright bulb underneath, then with my scope adapter attached to the camera, placing it over the slide and getting ok results after photoshopping. Well actually most of them are of a pretty poor quality but it is the photo rather than the technique! Looking back at my pre-digital photos they are pretty crap even though I thought they were ace at the time! Here are a selection from Israel in 1993-1994. 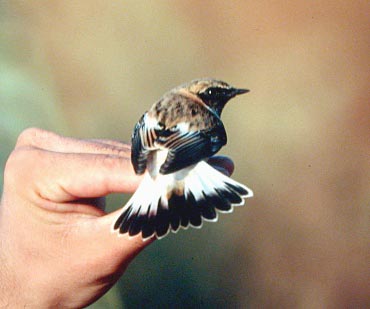 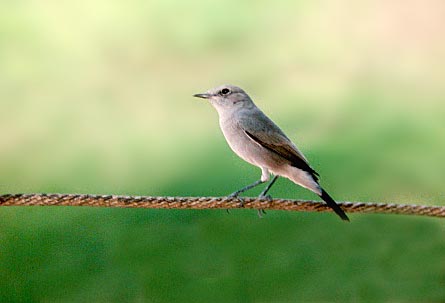 nonsense : With all this rain, football was cancelled again, but our coach managed to organise a last-minute friendly on the astroturf at St Sampsons School. It was a great game and we won quite easily. The smooth surface suits my game a lot better - proper football rather than the thuggish variety we sometimes get - so I played pretty well with some trademark Brazilian flicks and tricks despite the constant rain! Whilst there we were surprised and quite disgusted to see Snow White and Cinderella sneaking a crafty fag outside the fire exit (Christmas parade in Town today - It will never as good as when I was Bashful the Dwarf a couple of years ago! - there was talk of a BAFTA. . .). Below is something I found - especially for any fellow Pulp Fiction fans. 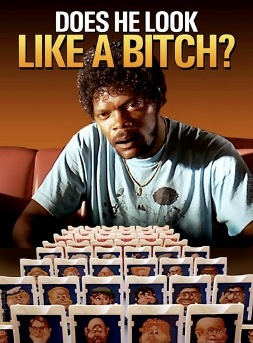 birds : The weather continues to batter us. It belts down every day and the wind seems continuously from the South which isn't much use to us. There are plenty of rare and uncommon seabirds in the UK it seems, perhaps when the wind swings at the weekend we may get some benefit. Top marks to my mate John though who only goes and pulls out a Black/White-bellied Storm-Petrel at Severn Beach of all places!! It has been great reading his emails about the excitement of his top find - I just hope he can pin it down to species, but it sounds unlikely.

I have been busy with work this week, catching up with stuff I didn't do when I was feeling grotty. Had a Black Redstart at Rousse today and a colour-ringed Pied Wagtail trotted on the playground outside my classroom earlier in the week. As well as a silver ring it appeared to have a single red one on both legs, although I had no bins and I was supposed to be teaching my year 9s about the phases of the Moon at the time!

Phil Alexander has taken a very useful shot of one of the Lesser Scaups (which are still there it seems) which shows the underwing pattern very well. Lesser Scaup shows bright white wing-linings (axillaries and lesser and median coverts) which contrast quite a bit with dull greyish flight feathers and greater coverts. And the photo appears to match this pattern - thanks Phil!

nonsense : As I said, I've been catching up with work a bit this week so not much time for nonsense. The wild weather sends the kids at school wild as well. I think in my 'Professional Development' interview my targets will be 1. to invent a time machine so that I actually have enough time to do my job properly, 2. to have cosmetic surgery to remove the black rings under my eyes and 3. to lobby for the new school uniform to include Chuck Norris "Action Jeans" because they look chuffin' awesome!! 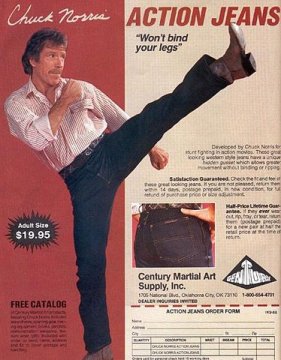 birds : Since football was cancelled due to a waterlogged pitch, I managed to pop down to the Mare this aftenoon to check out the scaups again. Unfortunately there was a tournament on and this meant that the birds were just sleeping in the middle of the large lake. It also started raining and was very dull, so my plans of getting superb photos were dashed. Nevertheless I waited patiently with the camera for a wing-stretch which was quite tricky with crap golfers peppering the area with golf balls. Julian arrived and we were asked to leave by the course owner, but since Julian is much more charming than me, he persuaded the woman to let us stay for a while to try and confirm the ID. I was there at least an hour overall and one bird stretched its wing once and I snapped a shot (or I "captured an image" as people seem to say nowadays - what's all that about!?). It is a very poor photo, but to me it clearly identifies the bird as Lesser Scaup - score!

birds : I had another chance to go look at the mystery Aythya at lunchtime, which has since been joined by a second bird. I suspect that there have been two birds all along, and on Tuesday I briefly saw a second duck on the main lake which I didn't have chance to look at. No-one has sent me any more photos of the birds so I was keen to get snaps of the second bird and hoped for any wing pattern to show. When I arrived, both birds were together on the small pond showing well.

As can be seen from the above photo, the second bird removed any doubts of Tufted Duck as it had grey feathers appearing on the mantle indicating a first-winter male scaup sp. The vermiculations on these feathers, and the ones on the flanks seemed quite strong - Lesser Scaup is more strongly marked than Greater on the grey areas.

Just as I set up the scope, this bird stretched its wing out briefly and I had a quick glimpse of the wing-bar. I know it is difficult to tell on one short view but it did strike me as being Lesser Scaup-like, with the secondaries being bright white, but the primaries being dusky with no white (see the photos below I found in the internet). 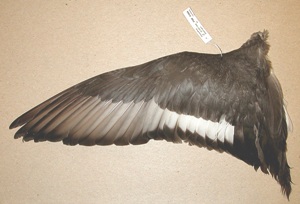 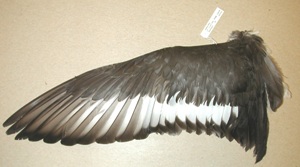 Of course, I needed to see the wing a few times to be convinced, but it didn't stretch it out again whilst I was there. It did sort of half stretch when I had the camera out as you can see in the photo below. Even on this photo, only the first 6 or 7 secondaries seem clearly white and the outer couple of secondaries look dull and slightly greyish.

Structurally, this second bird was very similar to the first, but probably showed a more obvious peak on the rear crown. I would certainly say Lesser Scaup is at the moment the top of my list of possibilities, but unless I get a pic of the wing pattern, I have a feeling that it will be left as unidentified. Hopefully this weekend I can get a chance to get the money shot!

nonsense : On Wednesday I went down to watch the France v Ireland world cup play-off match with a couple of my irish mates and we were literally incandescent with rage at the cheating French. First of all there was the blatent cheating by Platini to suddenly decide that France should be seeded and then Henry's double-handball was bad news. I know there's nothing that can be done about it now but Henry should be banned from the first matches of the World Cup for deliberately cheating. It must be time for video replays - I am sure supporters would prefer accuracy rather than worry about short breaks in the play. And to make it worse there was a table of Frenchmen next to us who clearly don't understand winning with dignity. It's a good job this was Guernsey as elsewhere they would have been pulped - and they made a hasty exit anyway. And they wonder why the British are suspicious about closer ties with Europe - it's the French! 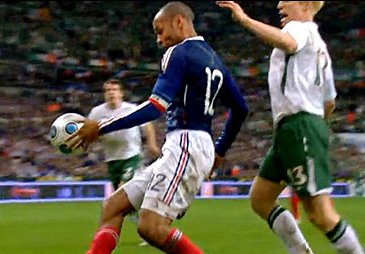 shame on you Thierry!

birds : On Monday I received an email from Tony Bisson that he had found an interesting Aythya duck on the lake at Grande Mare Golf Course. He thought it was a juvenile female Scaup but he wasn't totally happy with the ID. When he sent me some photos later that day it did indeed look interesting and I immediately thought it was a potential candidate for Lesser Scaup, but of course the ID of the species is not straightforward.

So today I whizzed out at lunchtime, shoved on my wellies and found the bird on the small pond swimming with Mallards. I watched it for about 20 minutes and took some photos, but I am not much nearer an identification!

One of the problems is that the bird seems to be a first-winter and so any plumage features are not obvious. The bird did not appear very large in the field but there were no other Aythyas to compare it to. The head seems to be relatively small, unlike the big blobby head of a Greater Scaup, and the head shape looked quite close to Lesser Scaup, peaking behind the eye. A Tufted Duck will often show a white blaize around the bill but should show some longer feathers on the rear crown. This bird shows some degree of 'shagginess' on the crown and I wonder if this is a sign of Tufted Duck.

On an adult bird, the bill pattern should distinguish whether it is a scaup species or not, but with this young bird, the bill is pretty uniformly greyish and of little help. The bill does not seem big and fat enough for Greater Scaup though. From what I have seen, I am pretty convinced that the bird is not a Greater Scaup just on structure alone, but I am not convinced that it is not a Tufted Duck. Of course the key thing is to get a photo or a good view of the wing pattern which is the main ID feature, so hopefully it will stay ages and we can get it sorted.