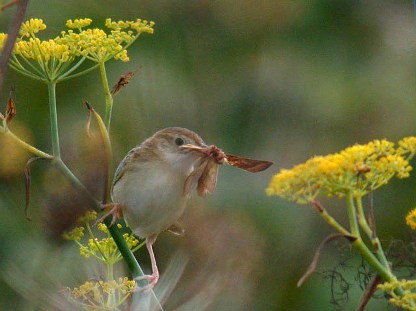 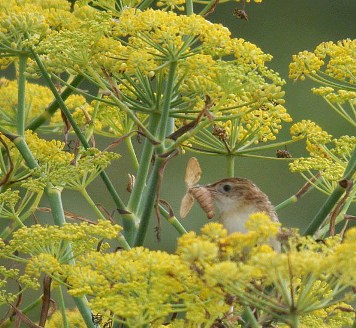 birds : I visited the Fan-tailed Warblers today, thinking that they surely by now they have some fledged youngsters. But no, the female was still bringing food to the nest site so there must still be chicks in the nest. At least I was able to find the (almost) exact location of the nest in the scrub. I sat in amongst the Fennel nearby and, although I wasn't really, really close to the nest, the female wasn't daft and refused to take the juicy spider it had caught back to the babies. Just shows that you don't have to be disturbing the actual nest to be disturbing the nesting process. So, of course I quickly retreated. Also, it seemed like the male's job was not finding food itself, but trying to distract attention away from the nest site whenever the female returned with food. When I heard the male calling loudly and flying round, often the female would fly in low with food. I don't know whether the species actually does this but that was my impression.

An hour and a half seawatch yesterday in poor visibility produced just 2 Balearic and 2 Manx Shearwaters but my highlight was a tight flock of 55 Common Terns that raced through close offshore.

moths : Whilst sat on a rock waiting for the Fan-taileds to show, I noticed a tiny moth scurrying along the rock next to me. It was the distinctive micro, Eulamprotes wilkella. This is a very rare species on Guernsey and this was only the second modern sighting (it also lives on Herm Common) and it lives on sand dune systems associated with Thyme. Way back in 1875, the famous Lepidopterist W. A. Luff, recorded this species at "The Grandes Rocques", which may have been the same location as I saw it in today. It is nice to think that a species can persist at a location for 134 years without being noticed in all that time.

A Gypsy Moth was in the trap this morning - always a quality migrant - but it has been a bit cold and damp this week to get good catches. I have made a slight change to the trap by sticking some mirror tiles to a piece of plastic, resting at 45 degrees so the UV radiation will bounce straight up to the sky rather than being wasted going straight into the wall. Hopefully it will improve the catch but its impossible to be sure. 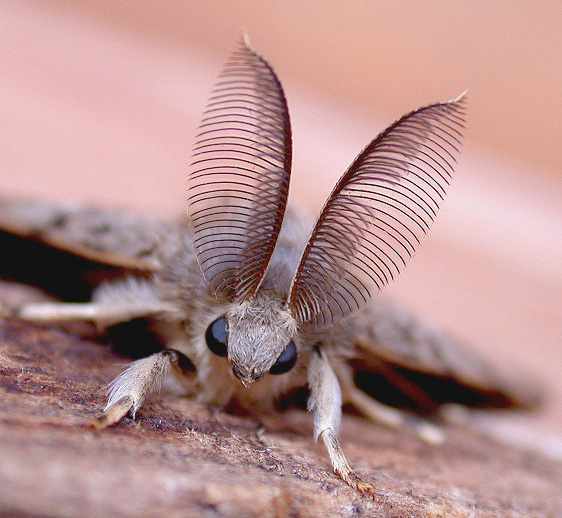 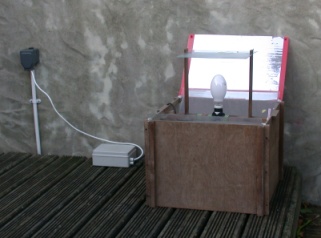 nonsense : Rosie and I have been married now for 11 years and i can honestly say that it has been a great privilege for her. Imagine 11 years being regaled by tales of vagrant phylloscopus, and explanations on the merits of the attacking full-back, and the endless BUBO birding anecdotes, and the intricacies of tortrix identification, and the excitement of adding to my Pulias Pond list and the . . . . etc . . etc . . ad infinitum. My first tick as a married man - Sooty Tern, Bird Island, Seychelles. 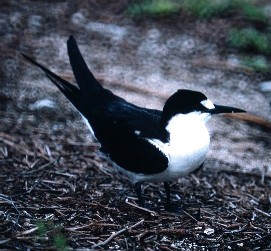 nonsense : I was in the kitchen today and looked out of the window to check on Anais who was playing in the garden. I saw her sat in her usual spot playing with a toy rubber snake. Hang on . . . we don't have a toy rubber snake. I ran outside and she was grasping a live, foot-long Slow Worm, brandishing it above her head like a maniacal witch-doctor! I wanted to take a photo of her but I was concerned she might do a Lenny and throttle the poor creature. So I took it off her - the first time i've handled a reptile I think - and showed it to Abigail and Aidan before letting it go. We have seen a few Slow Worms under the decking recently - a very warm and safe environment for them I suspect. 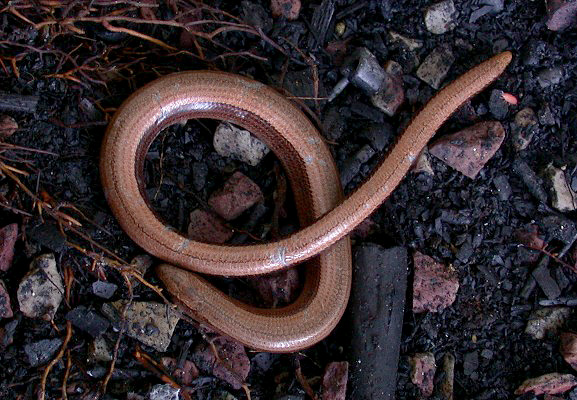 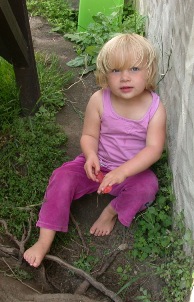 The garden wildlife spectacular didn't stop there, as a few minutes later I noticed a massive Frog in the corner - I don't think I've ever seen a frog in the garden and this was the biggest one i have ever seen anywhere. Abigail and I managed to get it into a bucket, and I took it out of the garden but it leaped out half-way down the drive and I had to run after it. A woman walking her dog looked at me a bit strangely as I leapt around the driveway in my slippers with a bucket. I eventually re-caught it and released it in the grass over the road. Also today a Blue-tailed Damselfly visited the garden. A female of the 'rufescens' form it seems from looking at the book. 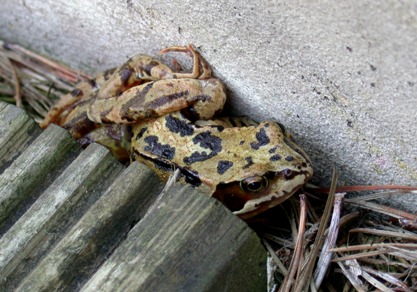 birds : The first Wheatear of the autumn was noted at Port Soif. Always gives a wee tinge of excitement as it shows that migrant passerines have started to pass through, searching for these being my favourite type of birding.

moths : Thorough sorting of the moth catch of 4th Aug meant a second new species for the garden - Endothenia quadromaculana. The tiny species mentioned last post included Stigmella trimaculella, one of the few distinctive moths of this group, and two probable Cameraria ohridella, the infamous horse chestnut leaf miner. This morning's catch was poorer but included a lively, tiny moth, which may be Cosmiotes freyerella. If so, this would be a further new species for the island. Finally, the second garden record of the Mediterranean Flour Moth (Ephestia kuehniella) was found inside the house one morning, clearly having just emerged from the Guinea Pig food or bedding. 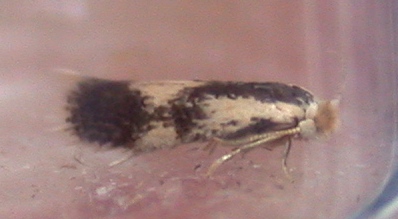 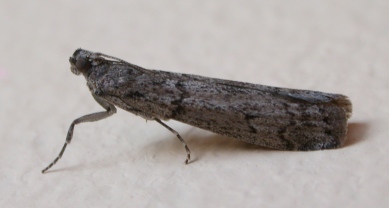 nonsense : The mighty Leeds United started off the season with a win today. After losing the lead with 15 minutes to go, it looked like a "here we go again" situation, but Beckford got the winner in the final 2 minutes. I predict a comfortable promotion to the Championship this season - unless Beckford leaves and we fail in the play-offs again. I have been enjoying looking at the archive photos on the Mirror Football website -

click here - especially liked the photo of legendary mental-case Robin Friday, flicking V's at the keeper after he scored (in here).

moths : The moth trap this morning contained an unusually large selection of the tiniest moths - double-figures of Lyonetia clerkella and Phyllocnistis unipunctella, plus 3 species of Phyllonorycter and 2 of Nepticulidae (to be identified). And this included two of a tiny and distinctive, but unfamiliar moth which, upon investigation appears to be Bucculatrix ulmella - an oak-feeding micro which, according to my data, has not occurred in Guernsey before! (Although usually when I discover a new species for the island someone else has already seen it a few weeks previously.) Pebble Hook-tip was the pick of the macros, and there was also a Harlequin Ladybird - this is the aggressive far-eastern species which has been introduced to Europe and has been spreading quickly. It is not widespread in Guernsey yet, but no doubt will become common soon, and drive out our native species - although they might die out after 5 years when the States refuse to extend their housing licenses. 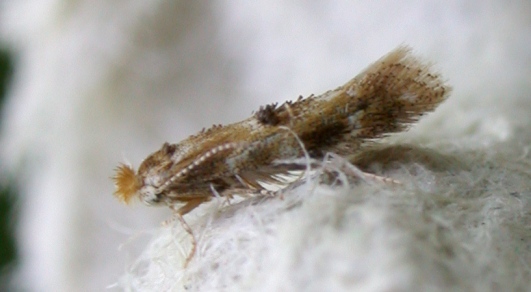 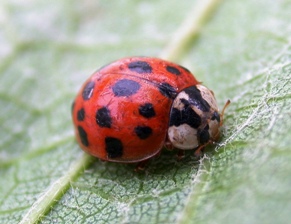 birds : Twice during the day I heard Peregrines calling from inside the house (me, that is - not the birds). Both times it was two high-flying birds circling above the garden which looked like juveniles, although they were too high to be sure with the bins. Also a Buzzard went over around lunchtime.

nonsense : Click here to see an example of the pointless, un-cool nonsense the EU is spending your tax money on.