birds/moths : A quiet end to the month, I mostly looked for birds of prey over the Fauxquets, but there was nothing out of the ordinary. Whilst there I did see the bluest female Common Blue I can ever remember seeing, and even wondered whether it was something rarer.

other stuff : I also went this week on my first ever plant twitch. One of my goals this summer is to find some of the more unusual plants of Guernsey. I know I have seen about 150-200 species of the regular plants and so I am searching for the unfamiliar and rare. To help me, the Biological Records Centre have, on their website, a terrific atlas of Guernsey plants and you can zoom in to more or less the exact spot that they have been recorded growing. It is an amazing resource and well worth a look. I knew there is only one spot where the rare plant Field Eryngo grows on the island, on the edge of L'Ancresse Common, and I bowled up and ticked it off - easy as pie! It wasn't flowering, but being a close relative of Sea Holly, it was easy to pick out. 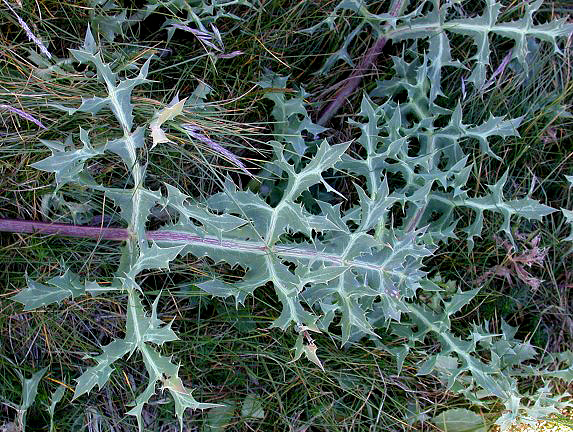 Well tomorrow is the start of an epic voyage. We have never been away as a whole family before, but since Grandma is 90 in a weeks time, we decided to go to her party - madness! So a ferry ride to Weymouth, followed by a 5+ hour drive to Palgrave, Diss on the Norfolk/Suffolk border, where we have booked a holiday home for the week. I am a bit concerned that, when we drove down to L'Eree the other day, Aidan pipes up "Are we nearly there yet?". I would not be at all surprised if I had to make a phone call tomorrow - "Er, hi Grandma. You know we were coming to see you next week? Well, we have just booked ourselves into a TravelLodge in Dorset since we have totally gone round the twist. Maybe next year . . ."

birds : Today I went to check out some gull-ringing at Mont Cuet Landfill Tip. This is part of Paul Veron's excellent project, darvic-ringing as many gulls as possible in the Bailiwick to find out where they head for when they leave the islands, and he kindly invited me to help. It takes quite a few people to carry out the task so a team of expert gull-ringers came over from England. They had been doing it all week and Saturday was the last half-day session and the only one I could attend due to work. So at 6:30 this morning I donned hard-hat and high-vis jacket and Paul drove me into the site.

As we waited, gull numbers gradually built up on the rubbish tip. I was very pleased that the place was not very smelly today - perhaps the wind was in the right direction - but it was rather sunny. The method used is cannon-netting. This is using a large net, spread out in a line with 'rockets' attached to one end, which when set off, fling the net over a wide area and on top of a group of feeding gulls. To do this, a flat area is needed which was in the corner of the site, and this is baited with tasty, cordon bleu gull-food (a.k.a. putrified rank).

And then it is simply waiting for the gulls to arrive. And that's what we did. Waiting. Then waiting some more. Then some more . . . The tip closes early on Saturday and the gulls had not been anywhere near the trapping area. Some of the guys thought that perhaps the gulls had learnt over the last 5 days that that part of the tip was a danger zone and wouldn't go back. On the rest of the tip there were hundreds of gulls swarming (below)

It was nearing 9 am and we had been waiting a couple of hours but the birds refused to come down. The others were contemplating packing up and going home without catching any birds. But luckily, at the last moment, a few gulls started to land in the trapping arena.

gulls start to descend into the trapping zone

BANG! The net hurtles over the gull flock.

Then it suddenly happened and I jumped, hence the wonky photo above. The net flew across and over the feeding gulls - quite spectacular. I stood there admiring the sight when suddenly, they were off!! Not the birds, but the ringers, sprinting towards the net before the gulls could escape. I was not prepared for this sudden burst of activity so I was lagging behind.

And they're off! The gull team run in to pounce on the gulls.

First job was to secure the edges of the net with piles of sacks so that the gulls couldn't crawl out. I am not sure how many were under there but I would estimate about 100. Due to the time constraints, they decided to just quickly put simple metal rings on the Herring Gulls - "Ring and Fling" apparently - and just keep the Lesser Black-backs for the proper Darvic ringing, since this species is the most interesting as it is a long-distant migrant, with some of Paul's birds reaching as far as Morocco in the winter.

As I am not an experienced ringer at all, I left the team to grab the birds and pull them out. My job was to keep hold of the rings and dish them out to whoever needed them. I was impressed by the efficiency of the team and the speed that they processed the birds so they were not trapped for very long at all.

"So What did you do at the weekend?" - "Oh, I was on my knees rummaging around the rubbish at the tip and wrestling seagulls."

The funniest thing was the LBB Gulls which had been put in sacks in the shade, ready for ringing and measuring etc when all the gulls had been freed from the net. But some of these LBB's were having none of that and every now and then you could spot a sack rolling across the floor trying to get away. Pretty hilarious to me. So the birds were all ringed, and the next job was to pack away and the unpleasant job of untangling the net from the rubbish.

It was very interesting to see what went on and I was impressed by the whole procedure. I don't know how these guys can do this all the time, they must be really keen to do this on rubbish tips every week or so. All credit to them.

birds : The constant sunny weather and clear nights mean that migrants have been passing over the island and not thinking of stopping. I have been out and about but only half-heartedly and with little reward. I did get a report of a Nightjar seen at dusk at Chouet, but is was already dark when I received the news. But I went out to look for it anyway armed with a torch - bit of a long shot, but you never know. Predictably, it wasn't there but I did see a nice Barn Owl.

moths : A mega sighting this evening, resting below the house outside light was a Scalloped Hook-tip - a first for Guernsey. This was rather jammy of me since I didn't get round to putting the trap out tonight. A new macro for the island is rather nice.

nonsense : How's about this for a bit of professional cake decorating? It is Spookley the Square Pumpkin that I made for little Ethan's birthday party. I was very pleased with how it turned out since I only used a knife and glass as a rolling pin.

birds : On the way back from work I called in at Pulias and was pleased to see that the Black-winged Stilt was still present. I managed to take a few decent photos but the sun was so bright it was rather difficult.

birds : Quite a splendid Liberation Day for me today. After the previous two weekends of family abandonment, this was a weekend with no birding, spent relaxing at home. Late afternoon today, I took the kids out in the car to drop Rosie off at her friends house, and was slowly driving home along the coast road. As I passed Pulias Pond, I casually glanced out of the car window to see if there was anything obvious there, just as I always do, twice a day, to and from work. Of course there never is anything there, so I was pretty gobsmacked to see, wading around in the shallows, a superb BLACK-WINGED STILT! Incredulous, and thinking I was perhaps just daydreaming, I span the car round at Ronez and there it certainly was - a chuffing Stilt!

A fabulous bird for the self-found list, although as I have seen it twice in Guernsey in the last 12 months, not quite as mind-scrambling as it might have been. We pulled into the car park and I managed to get Abigail to look at it through the bins - "It looks like a tiny flamingo with black wings" was her assessment which isn't a bad description of a Stilt. Whilst this was happening, Anais had sprinted off down the path and Aidan was having a grump, so I couldn't really stay long to study it. So I snapped a few record shots with the phone before heading back. It was nice to find a rare bird that a) wasn't a pain to ID, and b) didn't scarper straight away. The first self-found tick I have had for about a year, and a total cracker!