birds : The final week of July and looking for birds still seems a bit of a waste. There's a chance of a rare seabird, but the time taken to find one is unreasonable for me. There's a chance of a rare wader but its a case of a quick check of the ponds and then what else to do? Passerines are starting to move through but these are british birds mainly and so little hope of a mega. As you can tell, not my favourite part of the year for birding.

moths : So it's a good job that it's an awesome time for moth hunting! Trying to get the trap out every other night and the week started well with a Chocolate-tip on Monday night. My second this year and yet only the third ever in Guernsey. 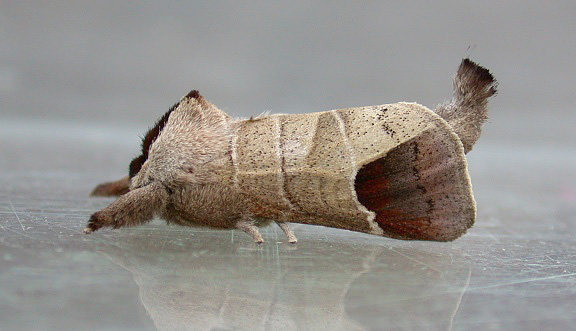 Tuesday we went on a family walk to the Fairy Ring at Pleinmont. This is the only place that I have seen a Forester moth ever, on the flowers by the cliff edge above the slipway. And indeed I soon found one in just the same place, feeding on a thistle, although it looked pretty old and scruffy.

As I was 'encouraging' it to start feeding on the top of the thistle for better photos, it seemed to jump off and land on my hand. Here it lay on its back looking more like a shiny beetle, and it seemed to have some kind of liquid on its legs. I wonder if this was either nectar from the thistle or perhaps some kind of defensive poison being secreted.

the children indulging in some light paganism

The next day I was visiting Vale Pond briefly in the evening and noticed a gallery mine on a Sycamore tree next to the pond. Looking in the books the only species that seems to do this kind of mining on Sycamore is Stigmella speciosa - this would be a new species for the island. Can't actually add it to my list though since this was a vacated mine, i.e. the larva had long since left.

mine of Stigmella speciosa in Sycamore, Vale Pond, July 2011

On Friday afternoon I had a few hours to myself and so, despite the baking heat, I decided to look for any interesting plants and insects along the south cliffs. I headed first to Saints because in all the years I've been here I have never been down to the old harbour there. I was delighted I did so because it was splendid in the sunshine, and I had about 7 or 8 new plants including Sea Plantain, Tutsan, Enchanter's-nightshade, Rock Sea-lavender and Nipplewort (snort).

I then headed up to Le Gouffre. This was for a specific reason, because there is a rare type of grasshopper in Guernsey called the Blue-winged Grasshopper which lives on the SW cliffs only and not in the UK at all. I would have assumed that, in the 13 years I have been here that I would have bumped into one, but no. I tramped across the cliff paths for half an hour or so, and was about to give up in the heat, when suddenly a blue flash erupted from my feet.

The blue wings cannot be seen at rest (although it also seems to have blue rear legs) so I attempted to get a flight shot by putting the camera on "multi" as I nudged it with my foot. Above is a composite of this. As you can see, it is a very bright blue.

birds : The final week of the school year being Activities Week, I was out and about most of each day, although it tipped it down all Wednesday (babrecueing in the rain isn't so splendid). On three separate days a young Peregrine was seen either over school or at Saumarez Park. Whilst the kids were milling around the Park, I positioned myself for supervision by the large pines near the lake. Here a family of Short-toed Treecreepers kept returning and I managed a few shots. I have never photographed the species before which indicates the limitations of my previous camera.

moths : Recently, the weekends have been poor weather-wise, and since this is the only time I can get the trap on, then I have been missing out a bit onwhat seems like a decent year so far. However, on Friday night, I had what I believe to be a new tortrix moth for the Channel Islands - Eucosma obumbratana.

Dingy Footman is a species which is common in Guernsey and occurs in two colour forms, a grey form and a yellow form (stramineola). This is quite unusual since, although moths vary a lot, these are generally either aberrant individuals or part of a 'continuous' variation. I have been taking a note of the number of each form recorded of this species in the last 4 years and the data is shown below.

other stuff : As usual at the end of term, the kids bring all the work they have done during the year and we sort through the piles of junk superb quality pieces of art. In amongst this, we pulled out this from Abigail's bag and we were amazed. They had to do a Lowry-style picture and this is what she came up with, which we thought was just great, especially as she is only 10. So proud.

moths : Last Sunday I went "pheromone-ing" again with the lures, looking for clearwing moths. I spent quite a while at Fort le Marchant with the Six-belted Clearwing lure in amongst the Bird's-foot Trefoil but there was no sign. The main purpose though was to find out if Fiery Clearwing was more widespread rather than just present at the original site. I tried 6 different spots moving north from the original spot but nothing arrived at the lure. I was just giving up and heading back to the car when I noticed a single large dock plant by the side of a lane and gave it a quick go. Two Fiery Clearwings immediately zoomed in!

This spot was only a few hundred metres away from the first spot, but was in a lane with gardens between, so it was not contiguous habitat and I suppose a second site for the species. I would like to do a proper study of the distribution but I clearly won't have time. Although it was quite breezy, there were plenty of insects about, including my first Hummingbird Hawk-moth of the year. 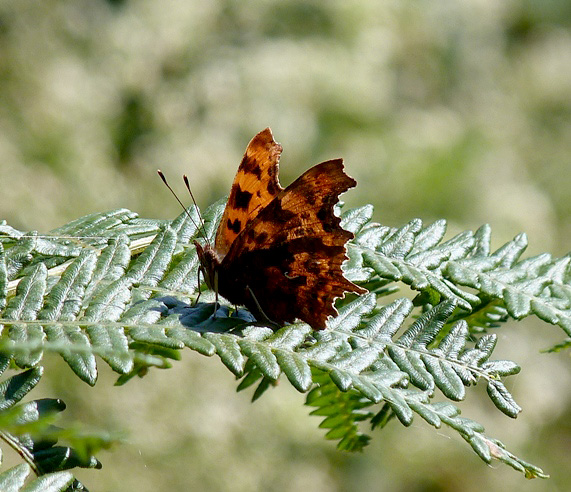 birds : I suppose that, since July has arrived, we can say that Autumn has probably begun - for birds anyway. The early breeders, or non-breeders, or failed-breeders will have started to move away from their nesting sites, and one species that appears mid-summer here in Guernsey is Med Gull. The number of post-breeding birds appearing here is increasing year by year, but this summer the numbers have jumped up and at lunchtime on Thursday I had a single flock of 12 birds on the rocks at Fort le Crocq. This was easily the largest flock I have seen in Guernsey, nine of which were juveniles.

Also Thursday evening, I was out and about at dusk and popped in to Chouet, where two young Long-eared Owls were showing very well. Also one was giving the 'squeaky-gate' call really loudly and it was so similar to an actual squeaky gate it was quite funny. Unfortunately I did not have my sound recorder with me.

other stuff : The most exciting event this week was the arrival of a new toy. It is about ten years now since I bought my first digital camera - my Nikon Coolpix. 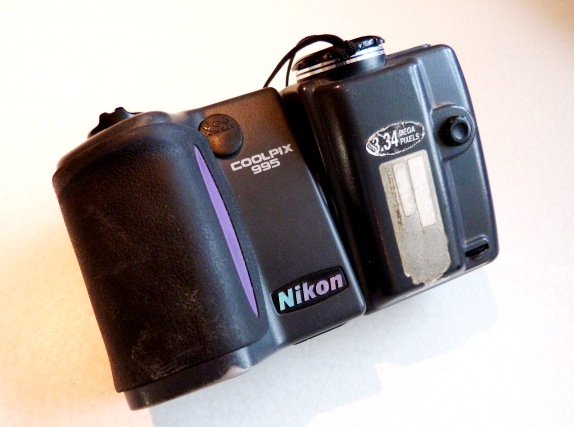 Even after these ten years and probably 100,000 photos it is still great and does a good job. It is great for macro and for digiscoping but it does have its limitations. Flight shots or fast-moving birds, virtually impossible - scenery shots, pretty average - convenience, not so good as I need to spend time to attach to the scope. So I bought a second camera to fill these gaps - a Panasonic Lumix FZ45. 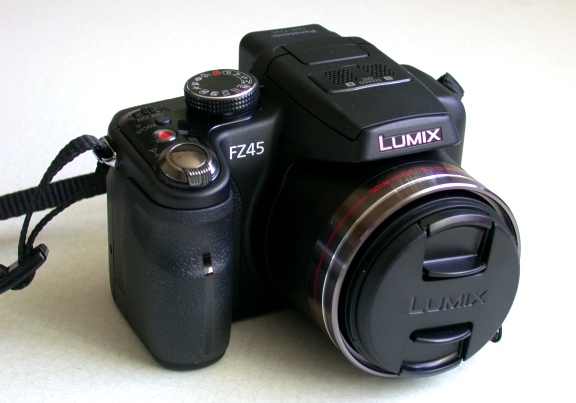 The main reason this was chosen was it can zoom to 21X - which is practically the same as my scope. Of course the quality at this magnification reduces but it is still pretty impressive and excellent for a birder to take out in the field for record shots. It clearly takes better general shots, the colours being noticeably more vivid and it has lots of different settings for different situations. The macro is not as good as the Coolpix but you can use the zoom to get decent field shots of things like butterflies. And it has a viewfinder as well asan LCD screen which I find much easier to use. Technology has advanced a lot since the Coolpix and this camera has lots of "smart" features which make focussing and lighting etc a lot easier. And it can take movies! So I will still need to use both cameras - the Coolpix for digiscoping and macro, and the Lumix for everything else. Here are a few photos taken already.

moths : There has been a great moth discovery in Guernsey in the last couple of weeks. Rich and Margaret were out and about when they saw a Fiery Clearwing on a Dock leaf. The next week, Peter went out with some pheromones and found there was a small colony in that area. This is a new species for the island, although it has recently been discovered in Alderney. In the UK this species is almost legendary and highly protected. It lives in just one small area of the Kent coast and you are not allowed to disturb it, catch it or even breathe near it. Obsessive moth collectors are getting fewer and fewer but there is a chance that a very ruthless collector may come over here to try and stick a pin in one. Hence, I am not going to reveal where the site is, and since the species feeds on Dock, a very widespread plant, it could be anywhere on the island.

Anyway, I borrowed Peter's pheromones - (well, the pheromones Peter keeps in his freezer, not Peter's own actual pheromones, that would be just weird) - and went out in the heat of the hottest day of the year on Sunday 3rd. The idea is that a tiny pot, full of the species-specific pheromone chemical, is hung on the foodplant, and the male moths come in as they think there is a 'responsive' female present.

the white splodge is the pheromone lure hanging on a dock plant (note that this is not the site of the colony, just another area of Dock I checked and failed to find any)

Within a minute of hanging up the lure the first Fiery Clearwing came buzzing in. After 5 minutes, the maximum I counted at once was 7, but there was perhaps ten or so. It was amazing to see such a rare moth so easily and at close quarters. However, it was difficult to catch them stationary, and with the exceptionally bright sunshine, photography was difficult,but I managed a few acceptable shots.

Fiery Clearwing - undisclosed site, Guernsey, 3 Jul 2011 - this was by far the brightest one that came in. No other clearwing has such redness on the wings, such orange legs, and that spectacular tiger-stripedtail.

a more worn individual, with the reddish areas a pale orange

Of course this excitement eclipsed a new species of moth for the garden list. The not-so-spectacular brown-coloured tortrix, Celypha striana.