Seasons greetings people of the internet. Christmas is occurring in a couple of hours and I have finally finished work. What a long, long term it was. One of the most tiring I can ever remember and so I'm pleased to have a break. The weather is abysmal at the moment and looks like there is no change a-coming. I don't mind cold abysmal, but warm abysmal is the most abysmal kind in the winter. There was nothing of note during the final 2 weeks of term, but I realised that I had managed to record a tiny snatch of the Waxwings' calls on 10th, which was surprising since nobody wanted to be quiet whilst I was there.

A call from Dave A yesterday though was encouraging as he had just found a Black Brant amongst the Brent Geese flock at Vazon. There was no sudden rush as I had already seen two others in Guernsey, but I went down this morning to check it out, and found it amongst the rockpools opposite Richmond Kiosk. It was a dingy morning and it was quite distant so photos were exceptionally poor.

Whilst looking at the bird, as I had my 'scope out, I tried an experiment by digi-scoping by holding my tiny movie camera against the eyepiece. I was quite satisfied with the results. Not artistically of course as the quality is not great, but I know now that I can get a record shot of a bird even if it is really too distant for my camera. Or at least I can try both and see which comes out the best. The video I came up with is below. 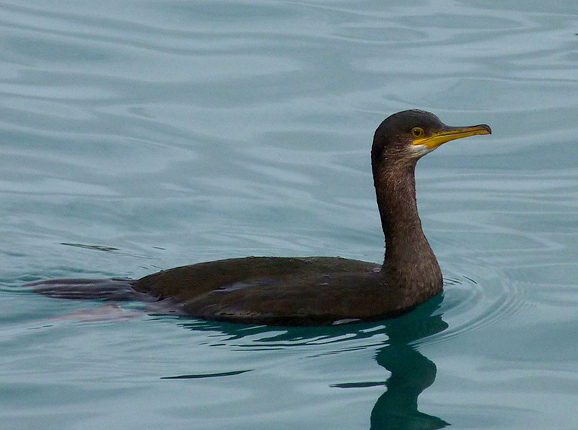 It was half-way through lunch hour last Wednesday that I glanced at the Guernsey Birds website. It had been very quiet for a few weeks and I hadn't even checked for messages on my mobile. So it was rather a surprise to see that a Desert Wheatear had been posted from Vazon beach. I could see the beach through the window from where I was standing and so I grabbed my jacket and raced down there at great speed. I had a meeting after school and this window may have been my only chance to see it if it was to be a short-stayer. But it was there and it showed very well - splendid! This was my third Desert Wheatear I've seen in Guernsey and we have now had 5 records, which is pretty impressive for such a rare bird. It's a nice species, and not to be sniffed at but surely we could have a different rare wheatear next time, eh? eh?

I returned the following lunchtime to try and get a few photos but it was another dark and dingy and rainy day, so I struggled with the light a lot. It wasn't a difficult bird to photograph as, typically for the species, it seemed quite unafraid of humans (or even me).

The shots were very grainy and so I popped down again on Saturday morning to see if I could improve on the photos. The weather though was again very dull and both myself and Mark G struggled somewhat with the conditions. We had a good laugh though, sliding down the dunes and rolling round on the sand, trying to run round ahead and get ourselves in the path of one of the wheatear's feeding sortees. It was coming so close at times that I couldn't locate it in the viewfinder and when I did, the pics were all blurred. We both laughed at how incompetent photographers we were, pointing to settings and dials on our cameras that we knew nothing about. I find the details of how a camera works so boring that it never sinks in and I genuinely just point and shoot, only ever changing the shutter speed. 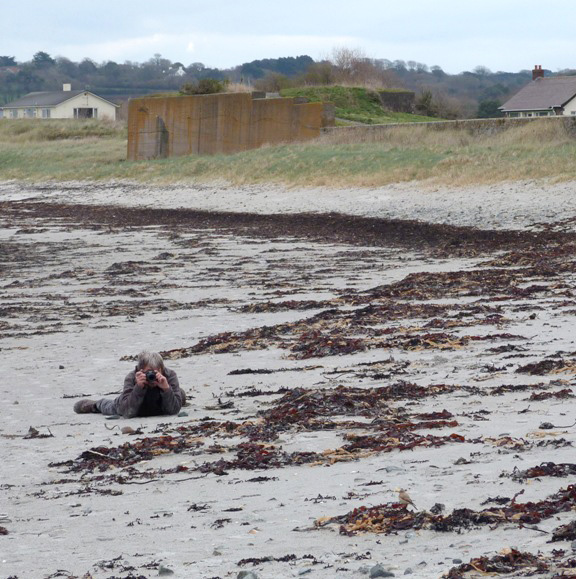 If you just found a spot on the beach and lay down, the Desert Wheatear would eventually come and feed within camera range, and (supposedly) decent pictures could be taken, unless..... 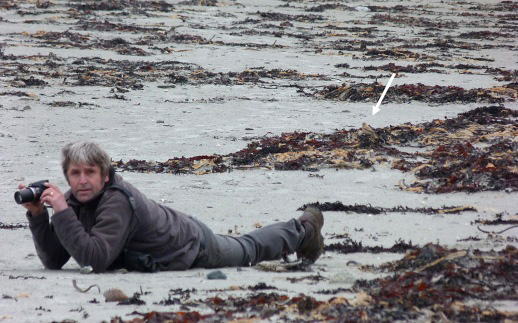 I also popped to Fort le Crocq where the wintering Water Pipit was feeding in the rockpools, my first sighting of the year of this species.

With the weather suddenly bright and sunny today, I drove down again today at lunchtime and sat in my car on the slipway, hoping for another chance for a photo. I did manage to get quite a decent one, but again a little unsatisfactory.

Raven - Vazon, 10 Dec 2012 - Whilst I was waiting, this Raven suddenly appeared low over the car having a scrap with a Carrion Crow.

At the end of school today I got another surprise as a small flock of Waxwings had been seen on the outskirts of St. Peter Port along Upper St. Jacques. Of course, I detoured that way home and straight away I could see 5 birds perched up on the rooftop aeriels - excellent. This was the third sighting on the island during this winter's influx but these were the first gettable ones.

The species has been pushing south through the UK a lot faster during this influx than usual, and so I felt we were pretty certain to get a few more birds this time. And there are lots and lots of berries on the island this year it seems, plenty for the birds to feed up on. We got chatting to the guy whose roof they were on and he said they had been around for over a week and he thought there'd been at least ten birds present. Then he suggested we came into his garden because he had one resting on his wall! Apparently it flew into his back window and stunned itself. It appeared to be uninjured but didn't want to fly anywhere.

Although quite sad that it may have been hurt, it was superb to see the bird at such close range. Judging from the wing pattern, it looked like young (first-winter) bird, since the white on the primaries did not curl around the tips of each of the feathers, it just formed a single stripe. Also, the red waxy tips were few and short. With every single birder, if not every single person, in the whole of the UK having seen Waxwings this winter, I was extremely pleased that I have finally managed some.