Well it might be Spring, but it is too bloney cold! Never have I known such constant icy winds at this time of the year. However, one of the satisfying things about birding is that the birds are ever so predictable. That may sound like it's boring, but it's actually quite reassuring. Whatever ups and downs are going on in my busy life, I know that the Wheatears and Sand Martins will return in the first two weeks of March, then the Swallows and House Martins will appear a couple of weeks later. The annual calendar of the birds as a background to the maelstrom of the modern world relaxes me.

Even though the temperatures this Easter holiday have been so so cold, it hasn't made hardly any difference to the migrants. All the predicted species have been arriving, just as they always do, and all at about the expected dates. It is very unusual to see a species arriving weeks earlier than expected. It makes sense because, as far as I know, these birds leave their wintering grounds triggered by changes in day length rather than weather conditions. How on earth would a Swallow know it's cold in the UK when it is in Africa? It takes them a certain length of time to get here and if they get here too early then they may not survive.

In all my years birding, I can count on one hand when I've seen a bird more than a week or so before I expected it. It is one of the key factors in successful bird identification - know what you expect to see before you see it. Apart from proper rarities, I am rarely surprised. So if you think you've seen something really early, I suggest you think again.

After the blizzards it took no time at all for all the snow to melt and it was finally on the 18th that I saw my first Wheatears of the year at Pulias. Only five days later I noted my first 2 Swallows powering north over the fields near home, with Sand Martins on the same day. Also of note was a Firecrest feeding in a garden along our road on 27th.

A couple of days ago, on the 28th, I went out for my first proper migrant hunt. I was keen to see some Ring Ouzels that had been present at Pleinmont for a few days but these were nowhere to be seen, and apart from at least 40 Wheatear there was little else on the headland. However, I did spot the first 4 House Martins for the year arriving in off the cliffs. Down at L'Eree there was both a Little Ringed Plover and a Black-tailed Godwit feeding on the pools on the Aerodrome.

On the beach at Vazon I was admiring the Rock Pipits feeding in the seaweed and quickly took a few snaps of some very bright birds which I expected were Scandinavian-raced individuals. I didn't think much of it until I got home and looked at the photos and saw that they were brighter than I thought and were probably Water Pipits.

I wasn't sure so I returned today to have a proper look at them and there were two birds present which showed all the features of Water Pipits. I was a bit rusty on breeding-plumaged Water Pipits and haven't seen any for a while. These were excellent birds, the blue-grey head contrasting with the brown back was very distinctive. I made a few notes on the not-so-good photos I took of them:

Also whilst I was waiting there the wintering Black Brant suddenly came up onto the beach with other Brents to drink from the fresh stream water. This is the first time I've seen it at all close and I lookedfor signs of any hybridisation but I couldn't see any. Managed a few snaps but it was in and out before I could get any really good ones.

The other notable bird of the last few days was also on 28th when the grapevine text told me of a drake Garganey just up the road at Vale Pond. A nice start to what I hope will be a rarity-filled Spring.

The icy easterly winds have certainly not been conducive for any moth trapping but I speculatively put it out on 27th as the wind had died a little, and was rewarded with an Oak Beauty. I have seen 3 others in Guernsey but this was the first record for the garden. 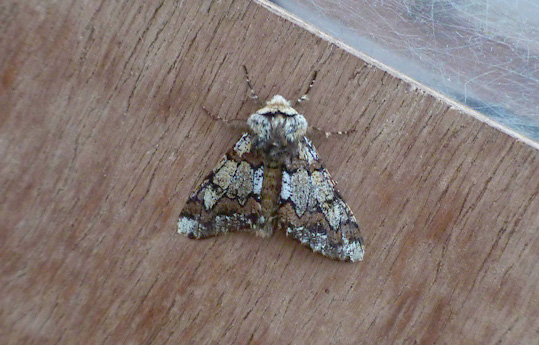 My 1000 for 1KSQ challenge is progressing well, although the cold weather means that the invertebrates are not out as early as they can be. I am on 282 species, so well over 1/4 of the way there. I have bought a couple of beetle books and the new hoverfly book so I am getting more tooled up to identify more species.

Eristalis pertinax - garden - the only species of hoverfly out and about so far. 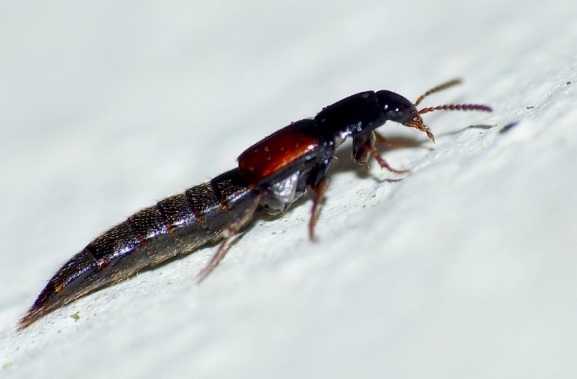 rove beetle sp. - garden - there are over 1000 species of this family in Britain so I have practically nil chance of identifying these! 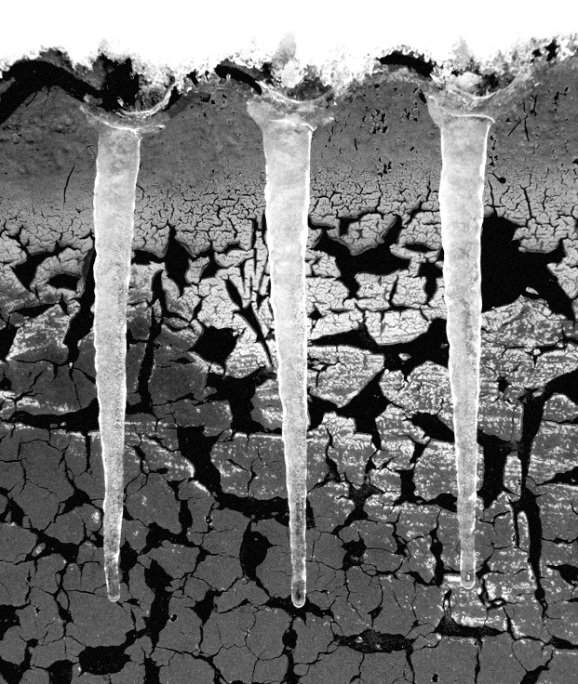 March was tootling along nicely. The flowers and insects were beginning to appear, the bird song went on all day, the first migrant Sand Martins and Wheatears had been sighted, and then..... SMASH!! It didn't just snow, it SNOWED!

Monday morning we were sat in the staff room looking out of the window wondering why we hadn't been sent home yet since the snow was falling faster and faster. After a couple of hours we were  finally set free and I picked up Aidan from school in the jeep. We got home just in time because in the afternoon the wind picked up and the snow fell denser and harder, until it really was blizzard conditions. The drifts were deep enough for people to abandon their cars and walk home like Scott of the Antarctic. 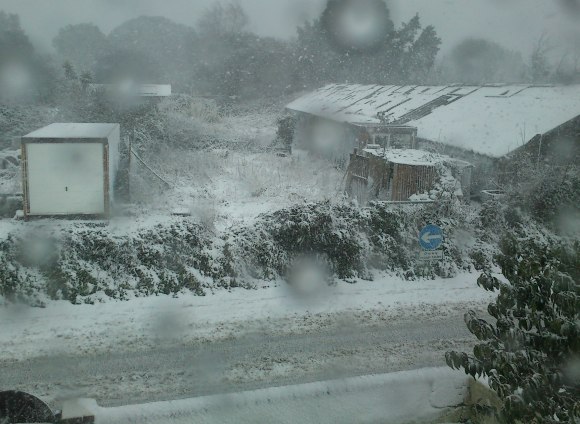 View from the bedroom

Such conditions in Guernsey hadn't happened since the 70's so this was certainly a novelty. Despite the wind the kids were desperate to get out and play. 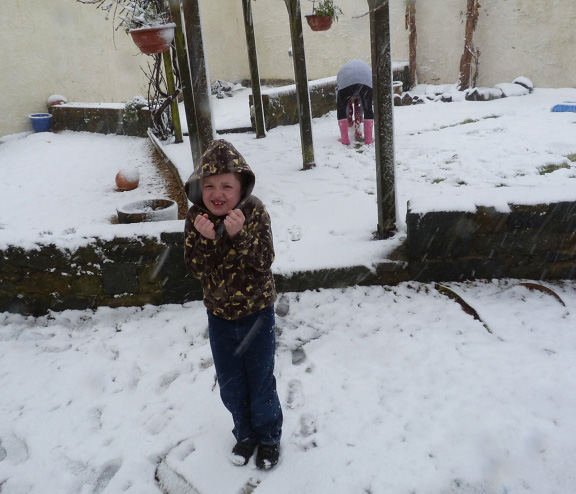 The wind seemed to be gale force at times, and with the weight of the sticking snow, many trees came down - at least 50 fell across the island. One of our neighbours across the road had one fall on their house.

The next day the wind had died down but it still snowed for hours and we were all off school. Some folk wonder why Guernsey can't seem to cope with any snow and that other countries can still get on with life without shutting down. But they tend to forget that all these places have snow-ploughs, gritters, massive piles of salt and teams of people to clear the roads. We have a couple of blokes sharing a shovel (almost), and even the main roads are one step beyond treacherous.

I managed to go out for a walk round the lanes to see what was around and noticed that Redwings had reappeared locally and there were Meadow Pipits feeding underneath the trees. A Skylark appeared out of the white sky and high above Epinelle Road a crow mobbed a super Short-eared Owl flapping its way northwards. 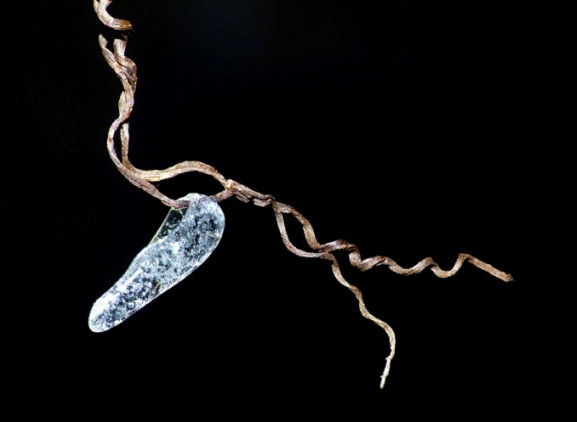 During today, the snow and ice in the lowlands melted very quickly and we had hardly any left by tea-time. I went out for a bit of birding, mainly to see the Avocet that was feeding in the saltmarsh on the Old Aerodrome.

The sun came out and I had a lovely half-hour down on the West coast. Three different Marsh Harriers were wandering around, a first-year Med Gull fed off the Shingle Bank and the Pink-footed Goose flock were still present bathing in the pools. The most unusual sighting was the flock of 12 Jackdaw that appeared high over head heading North, then U-turning to head back south again. At Fort le Crocq I saw the Water Pipit, which must be thinking about heading back South again to the mountains, and also a migrant Skylark. Some nice birding to end a memorable few days on the island.