Quiet times here on the island. During the last two weeks the weather has become mild yet again and so nothing new is arriving. It has been very pleasant though some of the time and the spring-like conditions are quite refreshing. The most unusual sighting as far as I'm concerned is the female Red-breasted Merganser that has taken up residence on Vale Pond. Although technically a coastal lagoon, this is the first Merg that I have seen here on Guernsey which has not been on the sea.

On Monday I went plant-twitching. The Jersey Fern is quite a common southern European species but it does not get as far North as the British Isles. It was discovered in Jersey nearly 200 years ago, and in 1877, a few plants were discovered on a hedgebank, along a lane, here in Guernsey. Despite searching by various botanists, this species has never been found anywhere on the island apart from this one unremarkable lane in Castel, and here it remains after all these years. As it is, unusually, an annual species of Fern, the numbers fluctuate quite a bit and sometimes apparaently it can be very hard to find. So I was not at all sure of being successful when I set out to search in my lunch hour.

It did take a while of 'getting my eye in' but I think I found a few tiny examples of the species. They were all very low down near the tarmac and on the unvegetated part of the bank, in amongst the liverworts. They did not seem very fern-like compared to what I'd normally class as a fern, but they are meant to be an unusual species. I am pretty sure the ID is correct but maybe some expert botanist will tell me I'm a fool.

Although I don't usually dust the moth trap off until the Easter holidays at the earliest, there is some insect life appearing already. Apart from a few micros in and around the house, the highlight was the Oak Beauty that was on the wall of the petrol station mid-week - only my second sighting of the species. It was also good to see that the camera on my new phone is pretty OK at taking moth pics so long as the species is big enough.

A couple of other miscellanea. If you are local to Guernsey no doubt you have seen this already, but a Latvian photographer was visiting the island and created an amazing HD time-lapse photography film. These kind of things are always brilliant anyway, but since this one included places that are so familiar, some that we see daily, it made it even more special. It is well worth a watch (click on the picture below for the link).

Also the latest Gyr Crakes T-shirt is out, in commemoration of the Spanish Sparrow that has been bossing the bird tables of Hampshire this winter (or is it the one I saw in Cumbria all those years ago?). Click the pic below to access the store and see the other designs. 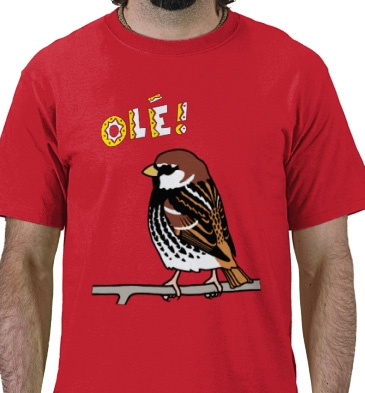