The major news this week is that I have seen my first Red-rumped Swallow for Guernsey, and also my first for Britain!(*)

It had been a quiet and frustrating week for me since Rosie was working extra shifts as it's the school holidays, and Abigail has been quite ill with the virus, so I have been stuck inside far too much than is healthy for a birder. But, on Wednesday, we had booked a lunch at the Longfrie and I was meeting Rosie there, and also my visiting parents. So I was frantically trying to get all 3 kids properly dressed and ready to go, when the MEGA-ALERT grapevine text came through - Red-rumped Swallow at Fort Saumarez!! Only a few Guernsey records ever and none twitchable for yonks, and more importantly, it was a species I needed for my British List. The timing was terrible. Just 15 minutes earlier and I could have just set off early and seen it on the way there. However, I didn't have time for that and drove to the Longfrie not a happy pixie at all!

I thought, it'll be there after the meal I'm sure. Except I wasn't sure at all. Swallows fly a lot. It could just head off at any time. Eventually everyone arrived and we ordered our food. I sat there for a bit. I sat for a bit longer. I sipped my coke. I was grumpy. Very grumpy. I explained to Rosie why I was grumpy. She wasn't impressed. "I need to go see this bird, I'll be back in ten minutes" I said. And I was off.

After negotiating the idiots on the Guernsey roads, a few minutes later I pulled into the Shingle Bank car park and jogged over to the assembled group of 6 or 7 birders. It was still around - YAY! I soon saw it as it fed above the skyline quite distant, and then luckily it flew towards us and it flew past quite close. Satisfied, with a decent view, I ran off again back to the car and was back again before my starter had arrived - lovely-jubbly. A tick-and-run merchant of the highest order!

[ (*) - Yes, I do count birds I have seen here in Guernsey on my 'British' List. I think it is only fair that I do since I live here. What other National list are these birds going to go on? France? Er, I don't think so. As my list is non-competitive it doesn't matter a jot to anyone (and as if I'd care anyway!). I reckon that Guernsey is much more British than those Norwegian islands in the northern North Sea anyway....]

Actually, the Red-rumped Swallow did stick around and I finally got a chance to go look for it this evening. It has moved to the Grande Mare area and I pulled into Rue des Bergers about 6:15. There were plenty of Swallows around the cow fields, and plenty of Sand Martins feeding over Grande Mare Lake, but the Red-rumped wasn't with either of these. So I thought I was going to dip out when I saw another group of 5 or 6 hirundines over a different field closer to the nature reserve. I walked into the field and soon saw that the Red-rumped was with them - excellent! I positioned myself half-hidden by a hedge and it started feeding right above me and was passing me within just a few yards as it fed up on the low-flying flies. Due to its high speed and the falling light levels, my photos are a bit poor, but it was great to have such a rare bird to myself. 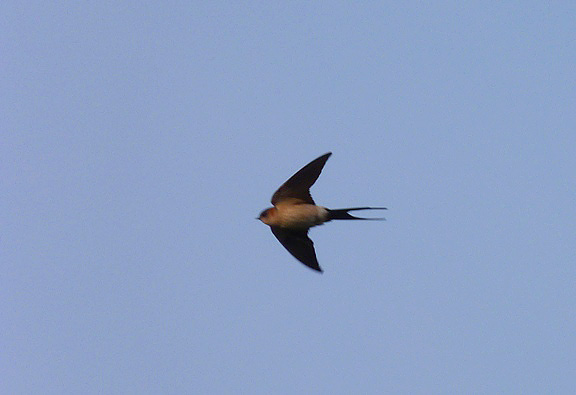