birds : As there was a change in the weather from sun to rain showers, I was disappointed to find practically zero migrants on Pleinmont on Thursday. A Greenshank flew off the island to the South and it was quickly persued by a Peregrine, but it escaped to carry on its autumn migration. Checking the gulls at Cobo on the way home there were 6 Med Gulls in the BHG flock - 2 ads, 4 1st-years - the most I'd ever seen in Guernsey.

moths : As there were few birds, I looked in the trees for evidence of micro moths and found a few interesting mines. Many of the very small species of moths look very similar to each other and the best way of identifying them is to look for their larva feeding in leaves. As these leaf-miners are often very foodplant specific, it is a very important part of moth recording. They are called leaf-miner moths as the tiny caterpillars feed between the upper and lower surfaces of leaves, forming tunnels - two examples shown below. To identify these mines, you also have to consider the shape and size of the mine, as well as the frass (poo) pattern - dispersed (left) or linear (right)

nonsense : Well 37 years old today - its a good job I don't feel that old, although playing two matches of football in 24 hours was probably a mistake (sorry legs). My prediction that Aidan would soon work out a new way up onto the walls came true this week. As you can see on the diagram below, this involved climbing the handrail of the treehouse balcony, hitching himself up onto the roof and jumping across the ravine between the treehouse and the wall. I think I might enter him in the World Freerunning Championships. 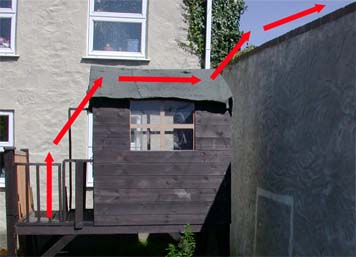