Not very many sightings to report in the last couple of weeks I'm afraid. I've had a couple of sojourns into the field but highlights were few and far between. On Sunday 18th, I had an hour in the northern marais looking for any late lingering warblers, but only Chiffchaffs were on show. I flushed my third Woodcock of the Autumn from the edge of the Grand Pre marsh and I actually saw the bill on this one rather than just the arse-end. Sitting in the hide there I recorded a few birds and picked up something a little out-of-place. . . .

This faint hooting was heard from the back of the reedbed and I presume it is from an Eagle Owl. Although not a likely vagrant, I think that it stands a chance. (Not really, of course. Apparently there is one in a cage in an adjoining garden. In the past some people have mistaken these low hoots as a booming Bittern.)

Moorhen - Grand Pre, 18 Nov 12 - the spectrogram shows the four 'harmonics' (?) 3kHz apart on each note, producing the rough quality of the call. 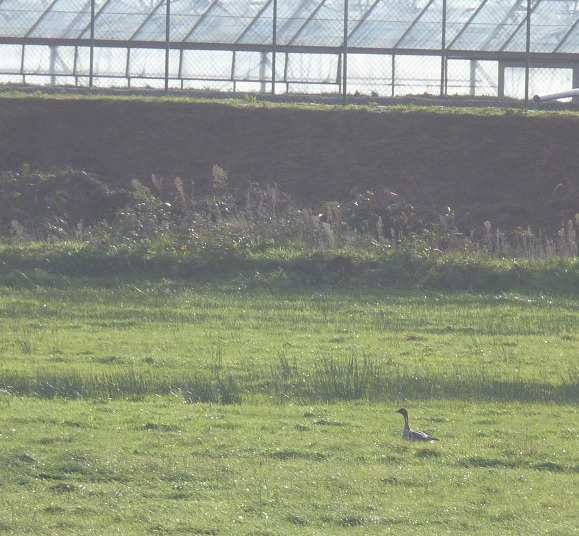 Pink-footed Goose - Vale Pond, Nov 12 - this solo individual is still hanging around. It'd be nice to take it to L'Eree so it could hang out with the small flock that is down that end of the island.

The most interesting bird news really, is that the fabulous "Birdwatch" magazine has published a full-page article and cartoon of mine in the latest issue. I sent them a speculative piece of writing back in the summer to see if they were interested, and they were. Which is great! So go out and buy it - you know it makes sense. (And before you ask, no I didn't employ a male model to pose for the photo, it is actually me!)