My New Year's birding has been focussed on the "Foot it" challenge and, after three sessions of walking from the front door, I have found 70 species, which I am satisfied with as my target was 80 by the end of January. On 2nd Jan I walked out southwards from the house and you can read about it on the Foot it website here. The highlights were both Black-throated and Great Northern Diver in Belle Greve Bay, plus a bonus of finding a Water Pipit feeding on the seaweed at the Halfway. Still officially a rarity and my first find of 2013.

Water Pipit - Belle Greve Bay, 2 Jan 2013 - a poor photo in the rain but you can see the bright white underparts and paler, browner upperparts compared to Rock Pipits. It also had bright white outertail feathers.

On 4th Jan, I did a northern loop and got the total up to 67 (read about it here) but I missed a few species I wanted to get. Then work happened! And then on Saturday (12th) I had a quick walk specifically to search for Woodcock at the Garenne, and I put one up within 2 yards of crossing the stream. With Long-tailed Tit and Peregrine seen also, that brought me to 70. There are two more weekends of January left and so I am quite confident of hitting the 80, especially as there are a few species that I know are currently within the 1 mile radius of the house. Here's the total list. 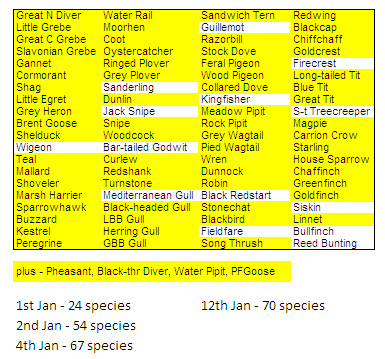 I've not been throwing myself into the "Patchwork challenge" yet but I have stopped at Pulias a few times on the way back from work, mainly because there seems to be lots of waders in Baie des Pecqueries at the moment. Both Sanderling and Golden Plover have been ticked off and I counted 80 Grey Plovers there in the week. Apart from that, on the first day of term, I used the more casual lunch hour to go see the flock of Pink-footed Geese at L'Eree, that I have inexplicably not been to see, even though they've been there for over two months.

Pink-footed Geese - L'Eree, 7 Jan 2013 - the first ever flock of this species in Guernsey.

I have been spending quite a bit of time on the "1000 for 1KSQ" challenge because this is something that you can do mostly at home and the immediate surroundings. As I have said, one of the benefits of doing this challenge is to identify species from groups that I have never looked at before. I had bought a few new books in preparation and have a selection of excellent websites to look at, which means that I have identified, for example, my first ever species of Moss, Liverwort and Lichen. It is rather tricky starting from scratch but I guess that's how you learn, and I have a mini-army of experts involved with the challenge which help to ID my photos and offer advice. [see the challenge website here]. Up to now I have identified 134 species in my km-square, and here are a selection of a few new species:

Opegrapha atra - a species of lichen, on a twig by St. Sampsons School.

Rosy Woodlouse - in the garden. A bright pink woodlouse. Who'd of thought it!

Cellar Snail - in the garden. I think that the only time ever that I have sniffed an animal to help identify it! (a similar species smells of garlic apparently)

Empicoris culiciformis - this is probably the best thing I have found so far, crawling along the outside wall of the house after dark, it may be the first (or p/h second) record for Guernsey. It hasn't a full vernacular name but it should be the "Lesser Thread-legged Assassin Bug" and it is a 4mm long killing machine!

Pholcus phalangioides - not a new species because this is a close up of the very long-legged spider that is common inside houses in these parts, but I absolutely love everything about this photo! It has to be one of my favourite wildlife photos I've ever taken - with the evil eyes, transparent head and limbs, and the hairy legs just reaching out of focus, it looks like something from a sci-fi horror movie!