We woke up this morning to quite sunny weather, with the snow of the glaciers shining above the valley. Straight after breakfast we headed out to Reynishverfi beach and its pretty impressive rock formations. The lava had formed hexagonal Basalt columns and you could see how the rocks had been bent and twisted. As well as this, there were a few spectacular dark stacks and arches over the sea. The sand was a dark grey colour, and blackish when wet. It was an unusual place and is apparently popular with film-makers. 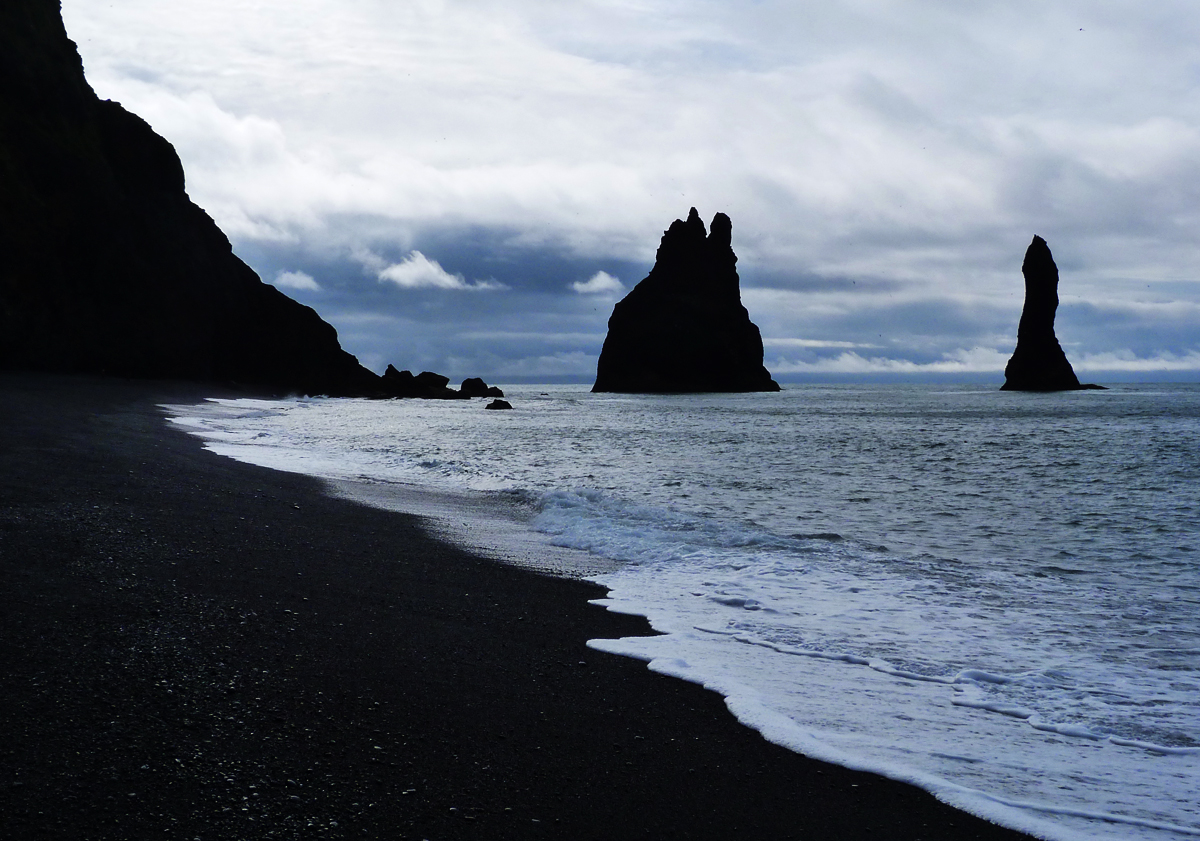 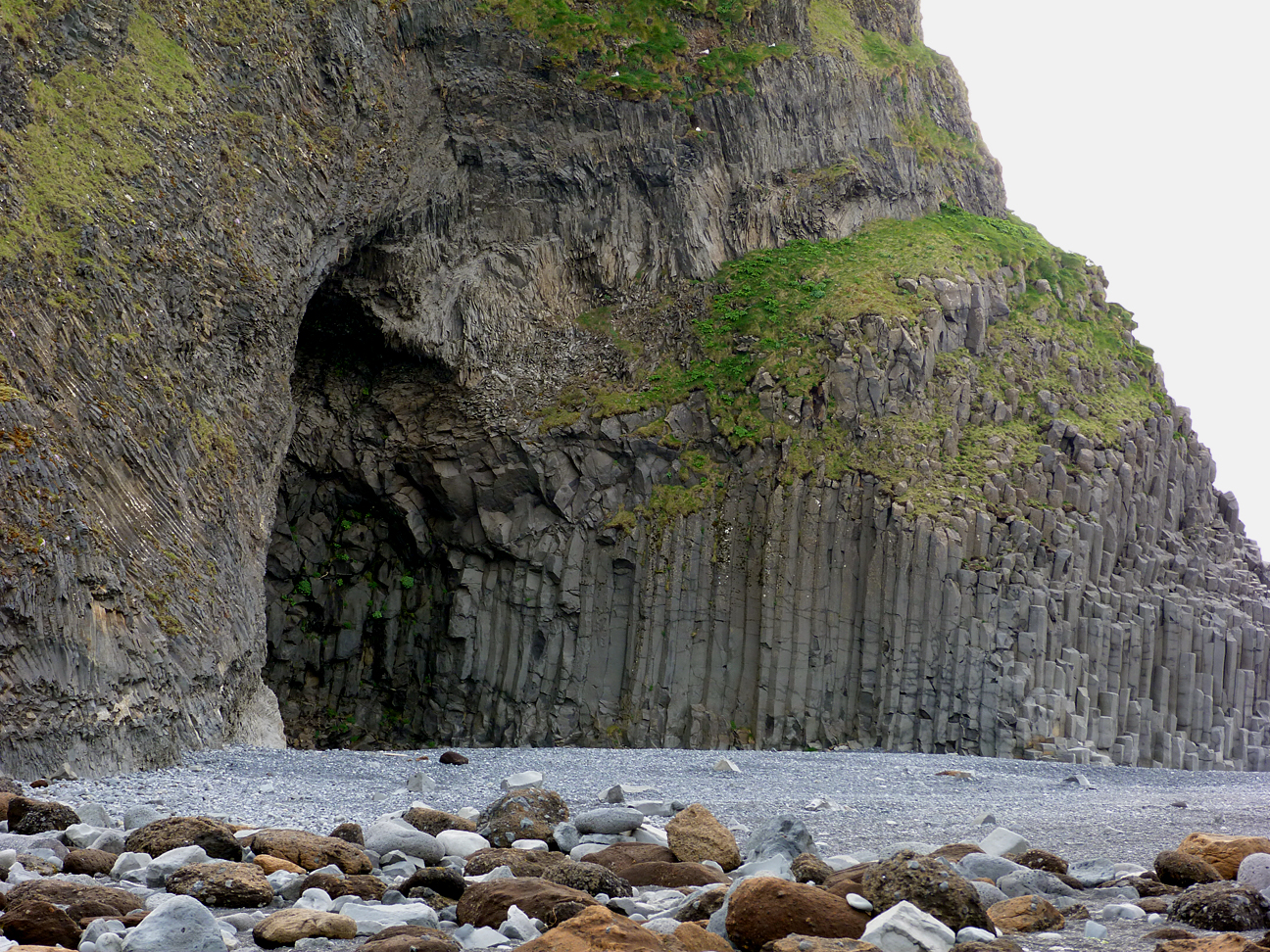 This was a good spot to look out to see but there was not very much variety out there. Plenty of flocks of Eider were bobbing about and there were groups of Puffin just off the beach. The Puffins were clearly nesting on the cliffs above the beach and were flying to and fro just above our heads. Again large numbers of Fulmar were nesting on all the cliffs of the area and were constantly going back and forth. There was also a Kittiwake colony here and a single Glaucous Gull flew by offshore. 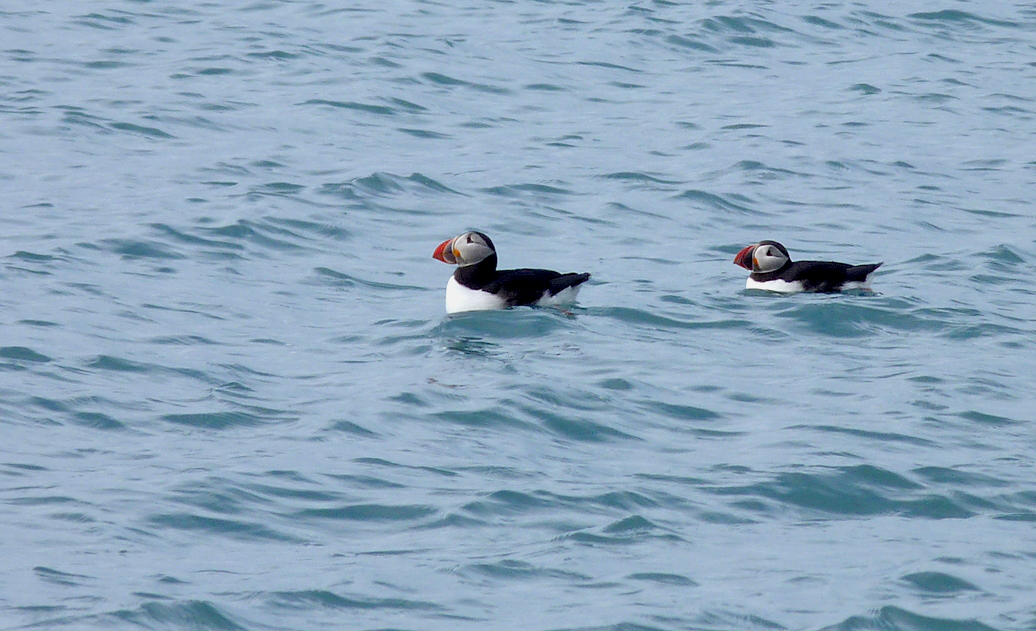 Pushing on, we headed back East along the coastal road, with similar species as before noted along the roadside. Two Short-eared Owls within a mile were seen hunting the grassy areas, my only ones of the trip. Our next stop was the Solheimajokull Glacier, where I was kitted up with crampons and an axe, for a walk across the ice. Another enjoyable escapade, the landscape on the glacier felt like another planet. The ice wasn't sparkling white, but with layers and layers of volcanic ash, it was greyish. The black triangular peaks on the photos below were not rocks, but were tiny pyramids of ice. Where there were little pockets of ash inside the glacier, the ice here melts slower to make these little peaks. We were limited as to where we could go, as the cracks in the glacier went down a long way, and what looked like tiny puddles, were deep deep pits. It is a shame that this glacier is retreating at about 100m a year, which is an incredible rate if you think about it. 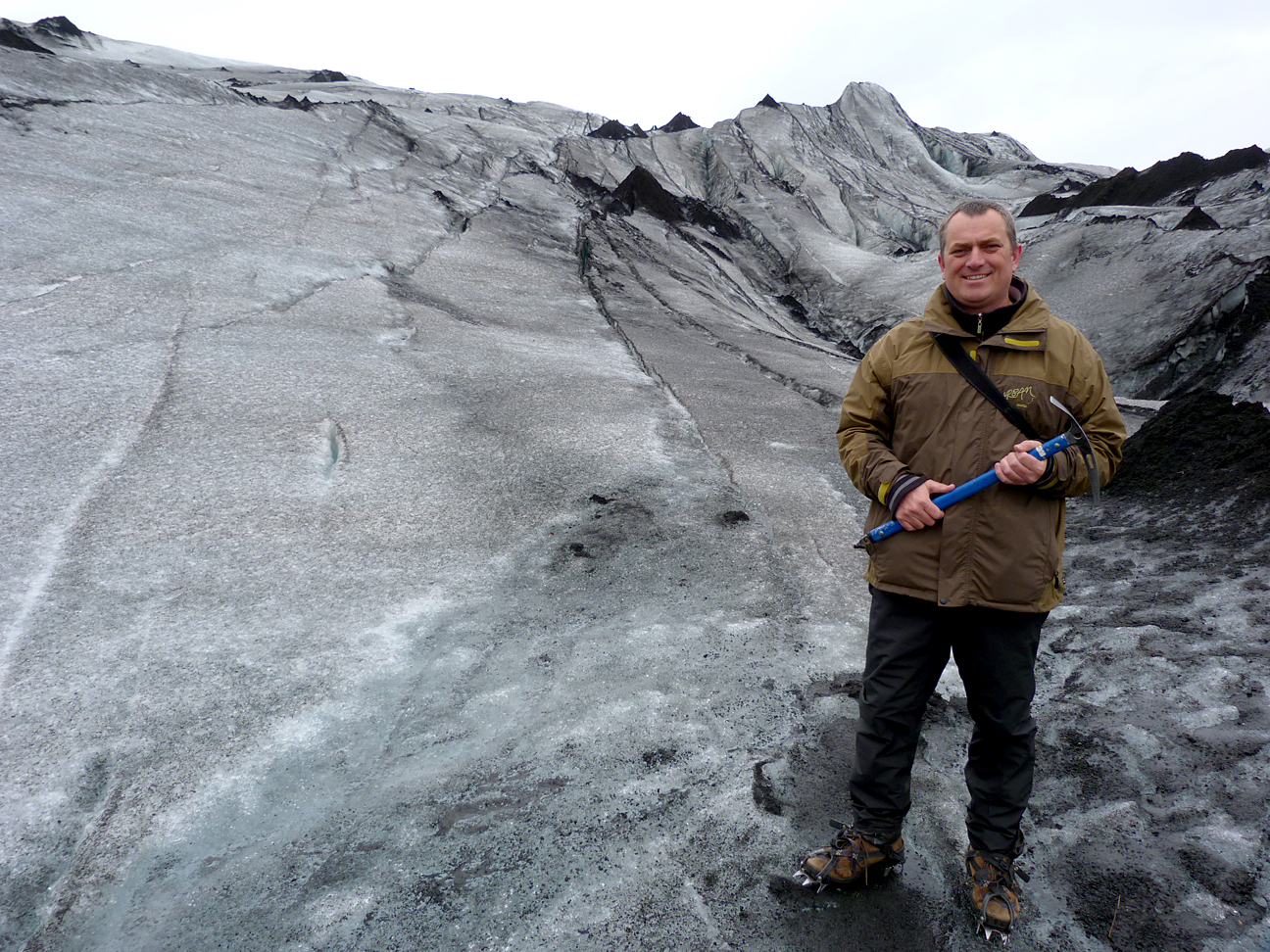 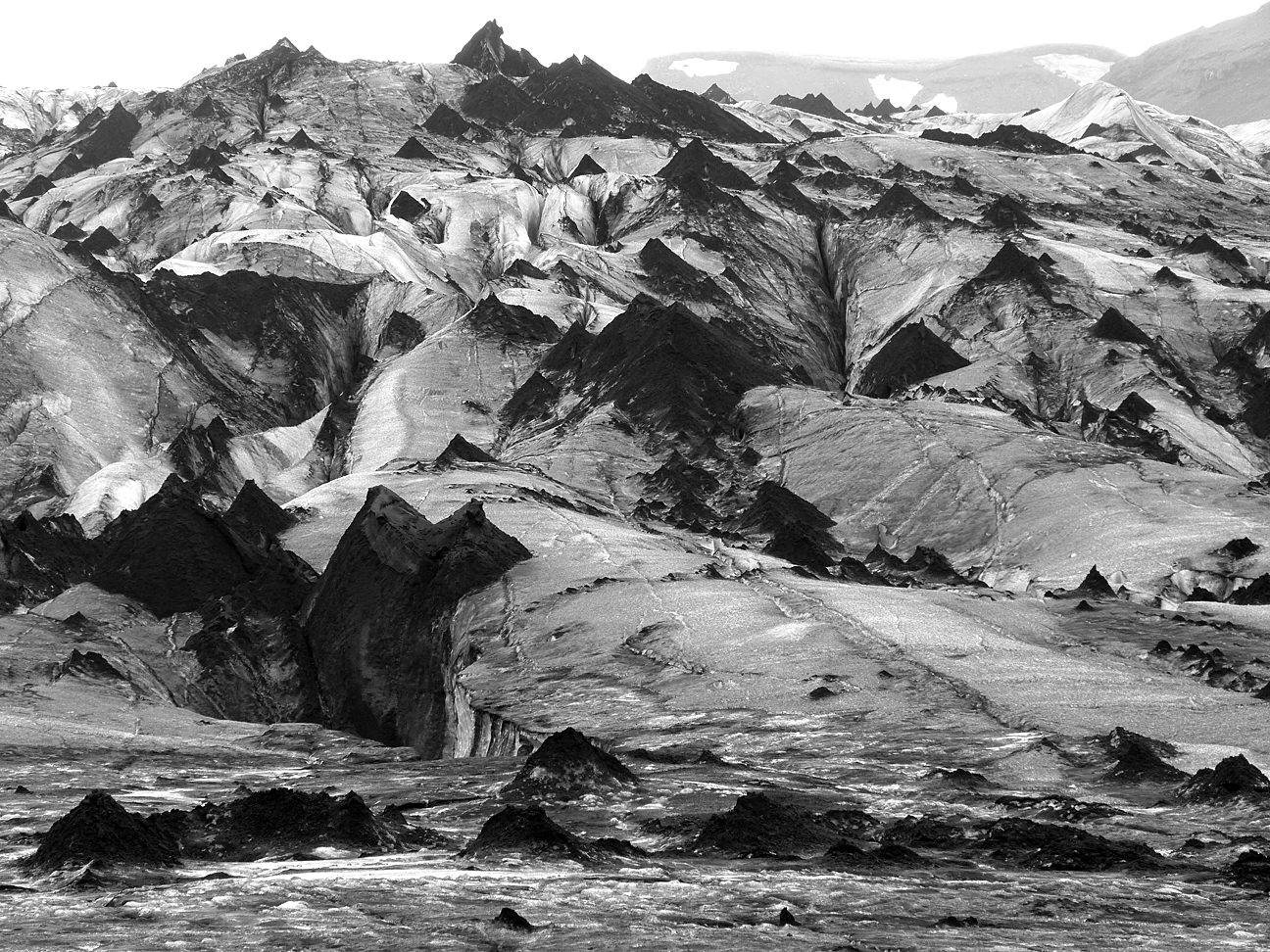 Whilst we were putting all the stuff back in the van, a dark-phase Arctic Skua came down and landed in the car park looking for scraps. Next was the wall of water that was Skogafoss, our third spectacular waterfall of the trip. More Fulmars were nesting in amongst the spray, and I found a pair of Harlequin Ducks on the river a little downstream. This time they ween't asleep but quickly swam away when I tried to get close. 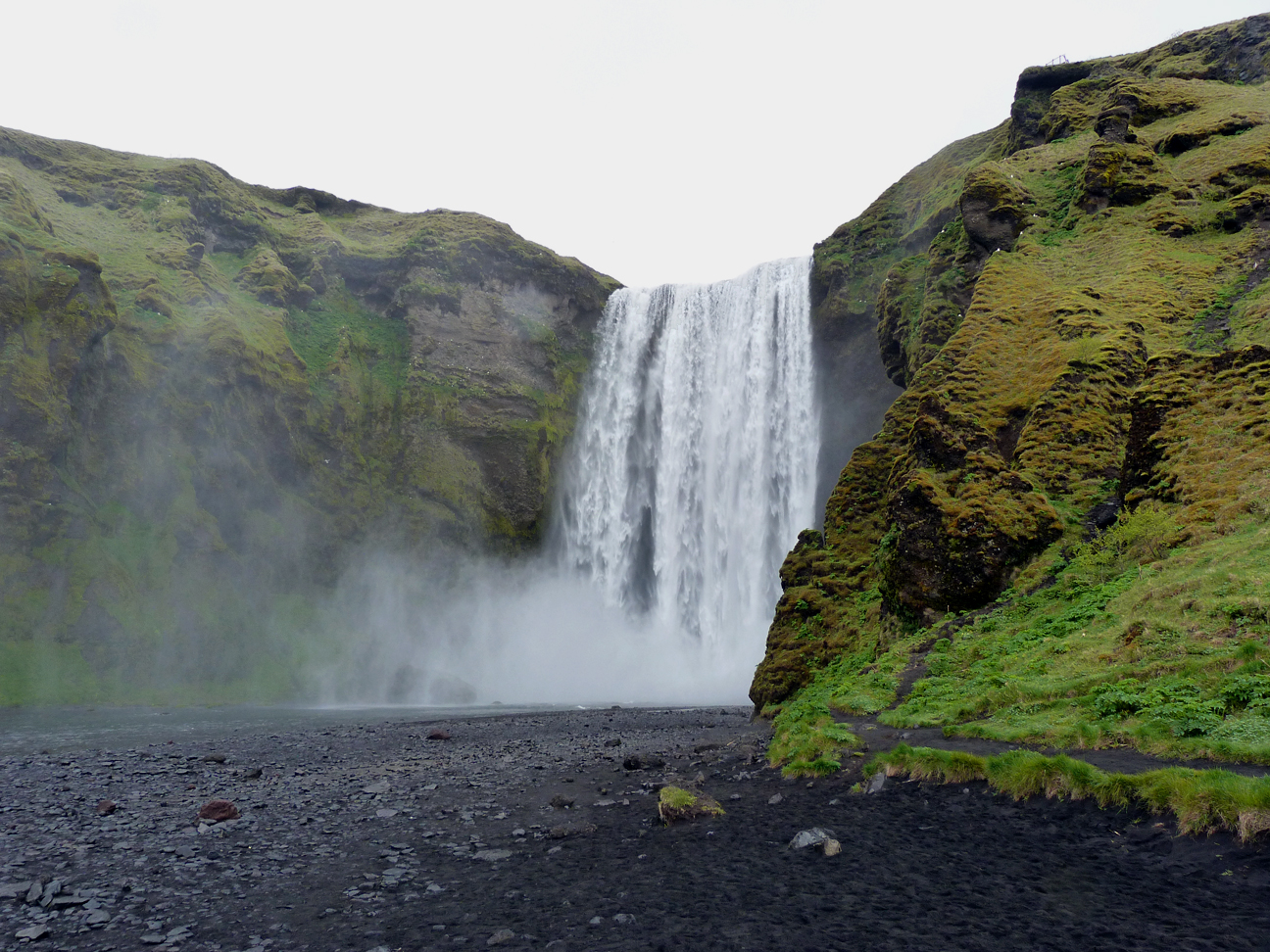 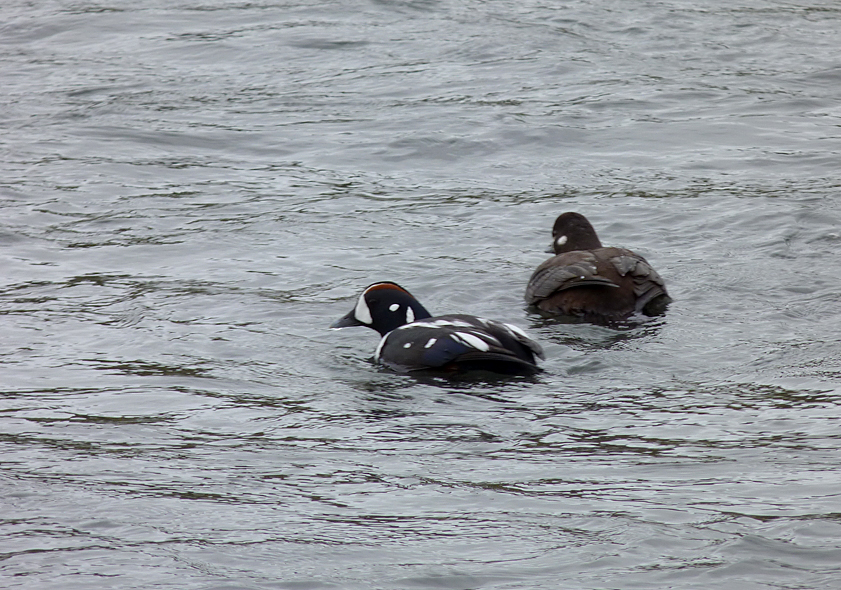 Pair of Harlequins on the river nearby

In the afternoon, the coach gained ground westwards, as the weather became gloomier. I saw little and the group stopped for some pony-trekking (well they called them "Icelandic Horses", but they looked like ponies to me). I wasn't keen at all on this, especially as they seem to have rammed loads of the animals into a tiny enclosure, and they were pushing and shoving each other against the metal fences. So I declined the offer and wandered off up a road towards some trees around some cabins. Despite being one of the most tree-covered areas I'd walked in, there was so few bird species around - lots of Redwings and Meadow Pipits, with a few White Wagtails and Wheatears along the road.

In the evening we arrived at Vatnsholt Farm to spend the night. It was a very nice hotel - but rather odd. The owner had a menagerie of animals 'out back' - including a rescued Arctic Fox, a Raven and some goats - and after dark he showed us a load of local TV clips of him with these animals dancing, talking, etc - very 'That's Life' stuff. There was a decent-sized lake down the hil, albeit a bit far away to see. There was little life on it though, just a few Whooper Swans, a small flock of Tufted Ducks and a male Pochard. I have since learnt that the latter is quite scarce on Iceland. There had been a few seen in the country during this time.