Well, October is more or less over, and I gave it the best welly I could. So much so that I didn't stop to take any photos at all this month. I managed a morning round Pleinmont three times in the last few weeks, plus popping in somewhere most days either in my lunch hour or after school. So, as much time as I could spent in the field and a few decent birds seen, but no megas unfortunately.

The first trip round Pleinmont was on 5th Oct and this was the first obvious day of late autumn migrants, with Meadow Pipits in the hundreds and at least 20 Skylarks seen. Swallows were also passing through, and I also had 3 Grey Wagtails and 4 Firecrests, plus a Reed Bunting pretending to be rare in the top fields. The best bird was a juvenile Rose-coloured Starling high up on the TV mast that was pointed out to me by the RSPB group who had just spotted it, but unfortunately it immediately flew off distantly.

The next Pleinmont trip was on 12th Oct and was quite quiet for the time of year. There were a few Skylarks milling about and the best bird on the tops was a Mistle Thrush by the camping field. In the valleys there were quite a few Chiffchaffs plus two Firecrests, and by late morning I headed out of Vau de Monel. As I walked up the road away from the VDM car park, I saw a bird flit across the road in front of me left to right, and into the small trees along the edge of the 'Chatsworth' lawn. It was quite a way ahead so I saw no detail but it was Robin-like, although a pale grey-brown colour, compared to the more rufous colour of that species. It looked very interesting and so I jogged up the road and realised it was still in the small roadside trees, as I saw glimpses of it hopping around the branches, quite warbler-like.

After a short while of waiting, I watched the mystery bird move slowly higher and higher, but giving only poor views, despite it being about 5 yards from me. It finally hopped into a more open area and I could see it a little better. Its plumage was very plain with few distinguishing marks and I was just trying to work out what it was when it fanned its tail. As soon as it did this, its identity became obvious, since the tail was almost jet black, with two bright white patches of white by the base - a Red-breasted Flycatcher!

As soon as the ID clicked however, it took flight again, across the road in front of me, and left round the corner back into Vau de Monel valley. Despite a good hour of searching I never saw the bird again and, as far as I am aware, neither did anyone else, although the weather deteriorated around lunchtime, and I don't think it was extensively searched for. It was a little disappointing - great that I had found a rarity, but not great that I barely saw it. I am pretty sure that this is the first RBFly that I have found myself and it's a pity that I was unable to get even a record shot. (so below is a sketch of the last one I saw a couple of years ago instead). 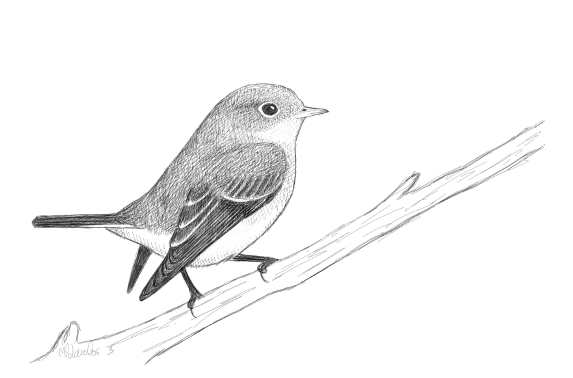 During the next week I had a couple of decent sightings at my Pulias patch. Firstly a Ring Ouzel flushed between rain showers on 15th, which I think is the first one I've seen there. Not a surprise since there was a huge influx into SE England just before this. Two days later, a young Common Tern was fishing off the headland, which has lingered up and down the west coast until the end of the month at least.

The final Pleinmont trip was on 19th where the highlights were a group of 4 Ring Ouzels arriving in off the sea and another Mistle Thrush - not a very pleasing haul for a mid-October morning. The final decent sightings of the month was the tail end of a decent seabird passage that I missed as I was at work. But off Pulias on 22nd, in just 20 minutes I had 3 Bonxies and a Balearic Shearwater.

Another October passes without "The Boy" being found, but it's the expectation that keeps you going. I always expect to find something even though I generally don't. If I presume I'll find nothing when I set off, then I won't enjoy what I am doing.

So for me, it's not the finding of rare birds that keeps me birding, it's the constant, exciting, unpredictable possibility of me finding a rare bird that does it.