The Autumn's birding choices are always dictated by the weather, particularly the strength and direction of the wind. We had some nice easterlies in the second half of September, good for drifting in migrants passing through Europe. However, we'd ideally like changeable conditions. Even good winds can become unproductive when they are the same for days on end, especially when the sky is fully blue and when they are so strong that birding becomes unmanageable. So it was pretty hard work trying to find migrants in constant fresh easterlies and sunny skies. Not complaining though - I'd rather get stuck with winds from the east than anywhere.

Before this high pressure appeared over the UK, I did some seawatching from Jaonneuse on 19th. A typical selection of seabirds was seen but nothing outstanding - 14 Sooty Shearwaters were new for the year, plus a handful of other shearwaters, skuas and terns.

It wasn't until the next weekend that the winds properly turned from the east, and on the saturday morning a few good birds were seen on Pleinmont. So I headed up there on Sunday (27th) and, with Wayne and Mark, covered most of the headland. It was pretty blowy on the top but we could see that some Meadow Pipits were migrating and we recorded all three wagtail species over and a Siskin or two. The bushes were pretty quiet with just a few Chiffchaffs and Blackcaps in pockets, but we found a Garden Warbler by the camping field. I then suffered a bout of bad luck as I was deep within the trees at Pezeries when a Great White Egret flew over, in the company of a flock of Grey Herons. All the other birders on the headland saw it but I missed out as I was tucked away. Luckily they are becoming annual here so I am sure I will grip it back pretty soon.

Before we left, we decided on a final circuit of the Mont Herault fields, and we soon saw a Hobby go past us heading East. It was an adult bird and gave terrific views, although I was slow with the camera.

We tried to walk through as many fields as possible to make sure we didn't miss anything and finally, whilst we were tramping our last potato field, we put up a large pipit. Unlike the bird I had a couple of weeks ago, this individual gave out a longer, drawn-out call and so proved to be a Richard's Pipit. We watched it head back over our heads, hover over a field for a short while and then head off distantly east, just like the Tawny did before. So I'm on a hat-trick of large pipit finds - completing it though may be a touch fanciful.

The next week's birding was difficult. There seemed to be birds around but conditions were not often suitable for searching. I managed to find two Tree Pipits getting buffeted around Fort Hommet on 28th Sep, where the Rose-coloured Starling was seen for a second time. The next Saturday morning (3rd Oct), the winds had settled down a bit and it felt pretty good up at Pleinmont. There had been an increase in common migrants but we were disappointed in the variety. We had 3 Whinchats and a Firecrest, plus two fly-past Mistle Thrushes as the highlight.

Wayne snapped me 'doing' the fields at Mont Herault. We are so lucky here on Guernsey that, in general, there is free access to many field systems, and we can actually get in there and work them for migrants. On so many headlands in the UK, interesting fields are fenced off and all you can do is look in from the outside and wonder what might be in there. You can see how warm it is at the moment as I am still birding in a t-shirt in October. 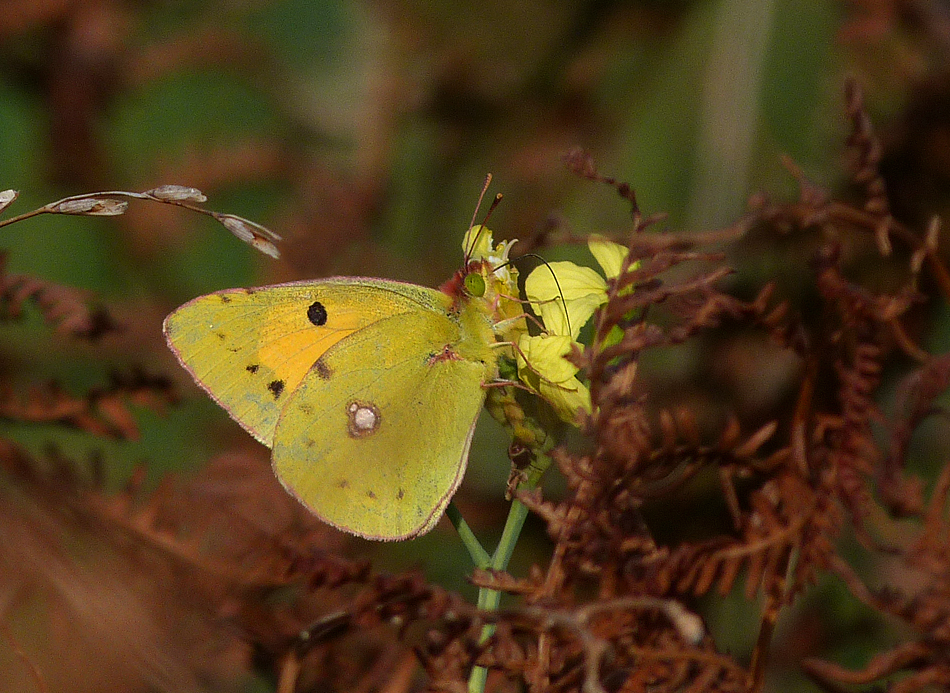