The second week of October was looking quite promising whilst I worked my patches during the weekdays. On Thursday 8th there was a small wave of new arrivals with a few Wheatears, Chiffchaffs and Goldcrests right out on the headlands, and numerous of the latter in the woods at Le Guet, along with a Firecrest. The day after there were plenty more Chiffchaffs in the willows along Port Soif nature trail, so I was positively expectant heading into the weekend.

On Saturday 10th the Sultans hit Pleinmont but it was a little bit quieter than I expected in the bushes, with few passerines grounded, although there were some interesting birds migrating overhead. We had big, big problems with a mystery falcon that we never got a decent look at. We first saw it fly East, at distance, across the northern side of the headland. All I got on it was that it was very pale below and darkish above and that it wasn't at all obvious what it was. An hour or so later, what was presumably the same bird suddenly appeared above us, in the company of a Kestrel, over Valniquets. It was just silhouette, and it quickly dropped behind the trees, but the identification just didn't click for us. Then a bit later, Mark saw it briefly again off the cliffs and this time it seemed to head out to sea and away. There was talk of a possible Red-foot, but it will have to remain a frustrating mystery.

Most of the morning was spent looking out for this bird but we had a few decent flyovers including my first Lapwings of the winter, and my first two Crossbills for ages. These birds flew East over the scramble track really quite low and close, even close enough to see their tiny crossed bills as they bounded by.

The next day (11th) I took out Anais for a drive, and - I don't know how this happened - we ended up at Pleinmont again. There seemed to be more birds in the trees than yesterday with the top path above Vaux de Monel especially good for Chiffchaffs and 'crests. I was definitely surprised not to find a Yellow-browed here but 3 Firecrests were typically great. Walking back to the car we bumped into the island's first Black Redstart of the Autumn - always a sign that the migration season would be soon coming to an end. 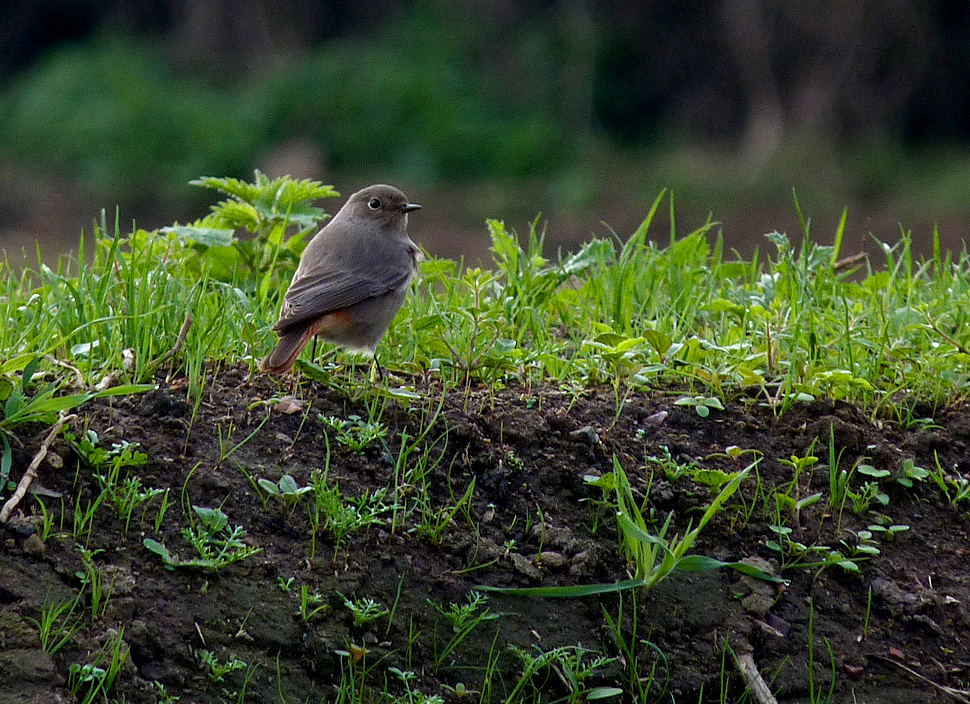 Anais trying to pick out an Eastern Crowned in the lane by Vaux de Monel.

On the way home I distracted Anais with sweets and crisps, and stopped to see the showy Snow Bunting that had been at Fort le Crocq for a few days. I managed to take a few photos from the car window as it hopped around amongst the tyres and other photographers. 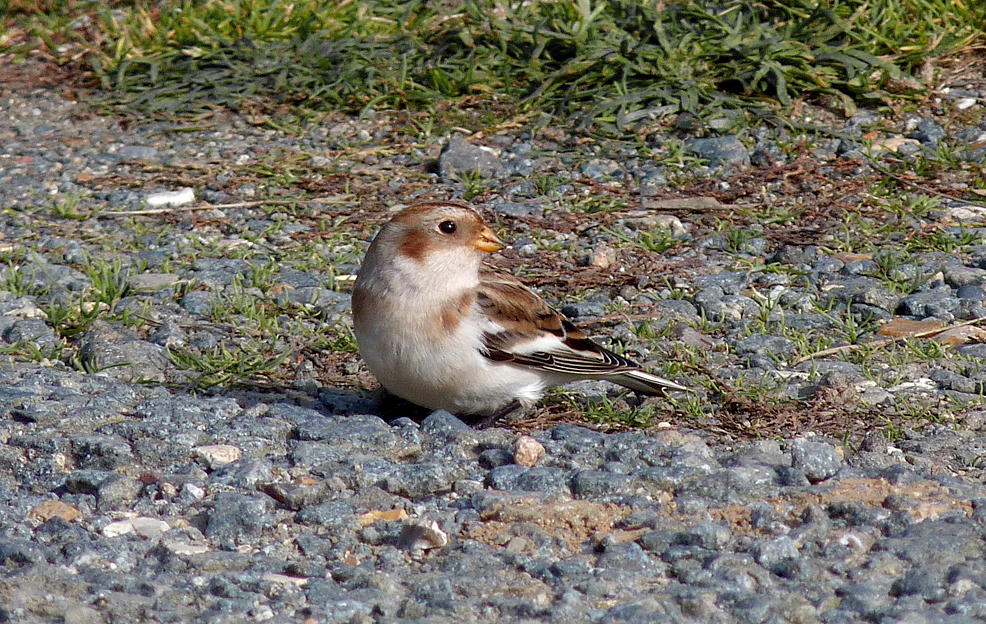 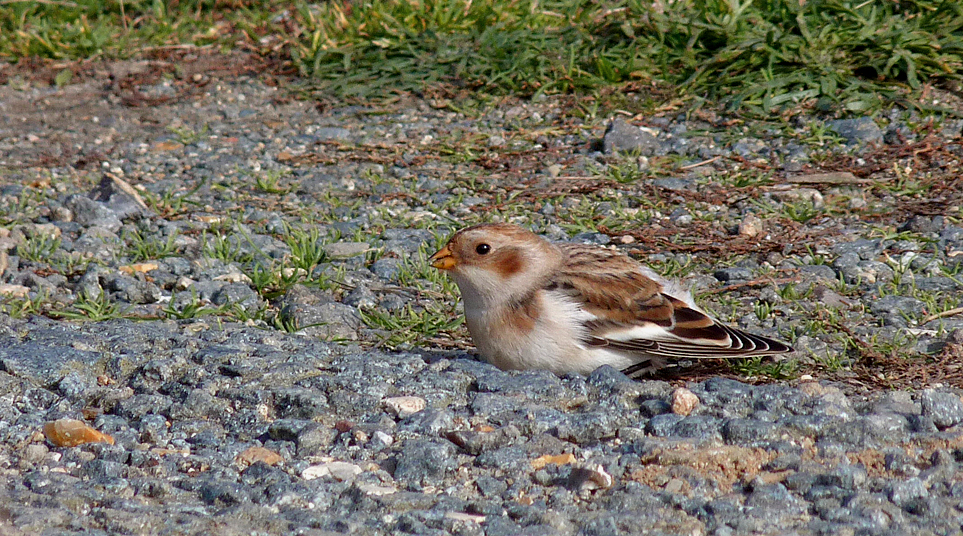 On 17th October we had another Saturday morning up at Pleinmont. In some areas there were lots of common migrants around, but in others it was totally dead - very patchy. Highlights were a few Ring Ouzels and I managed to see 3 Firecrests in one bins-view! We also had a late Yellow Wagtail and lots of other birds to look at but. alas, we couldn't find anything rare or scarce. 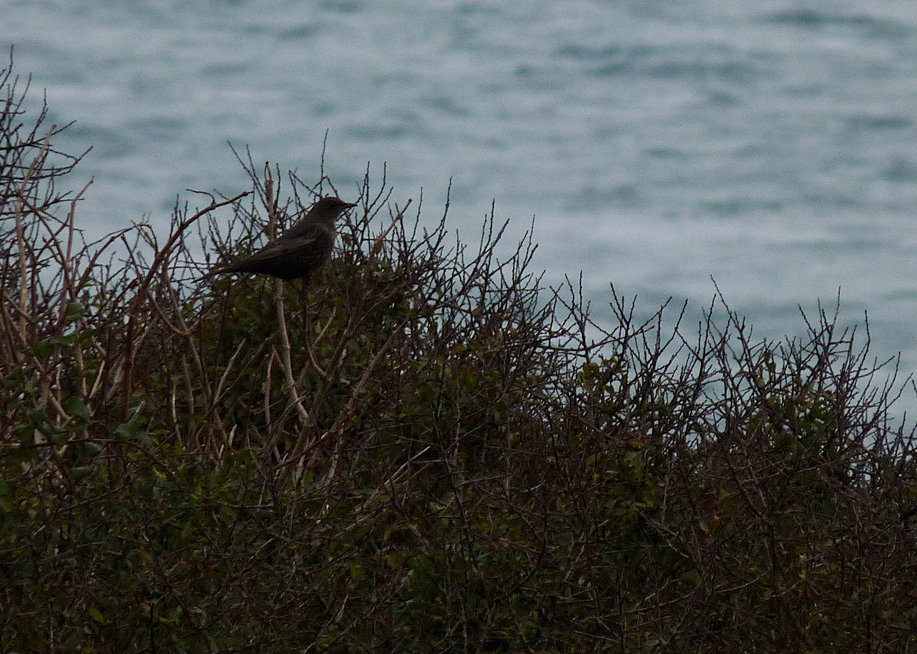 The final decent birds before the half-term holiday were two more Snow Buntings that were present along the path between Vazon cafe and Fort Hommet. I popped down to see them in my lunch hour on 19th, just after a very wet morning. Unsurprisingly, I walked up the path, looking ahead trying to spot them, before practically walking on top of them by my feet. More ridiculously tame Snow Buntings, blissfully unaware of the idiocy of human beings. 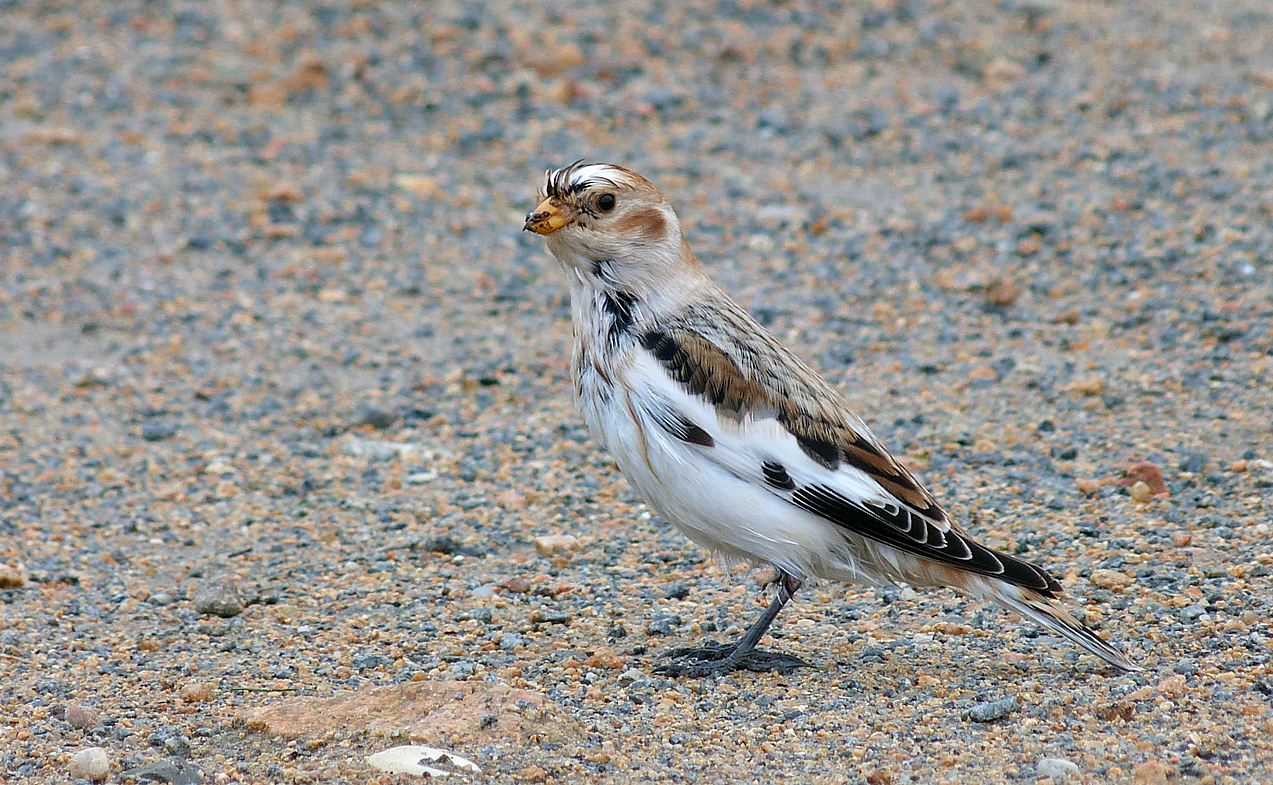 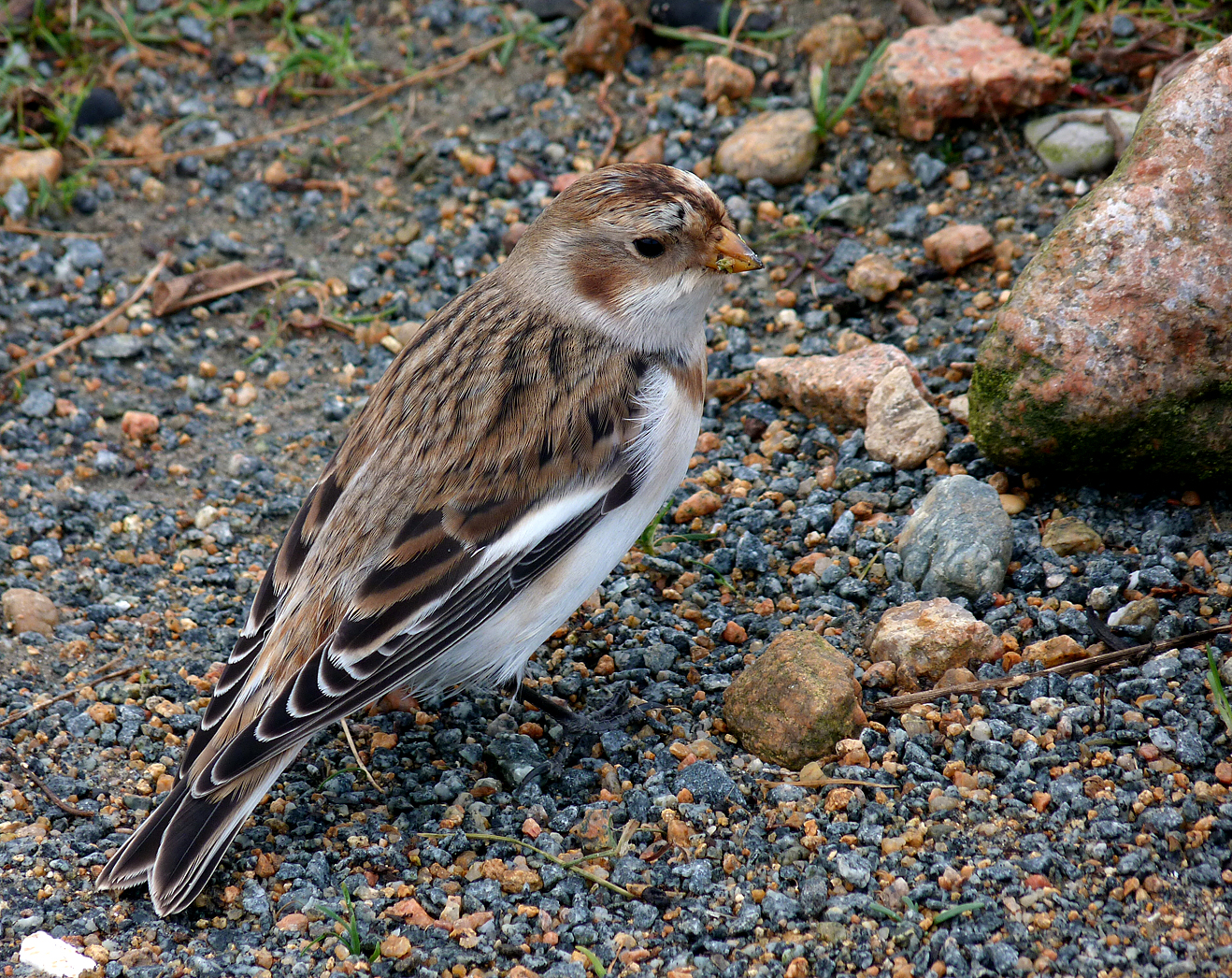 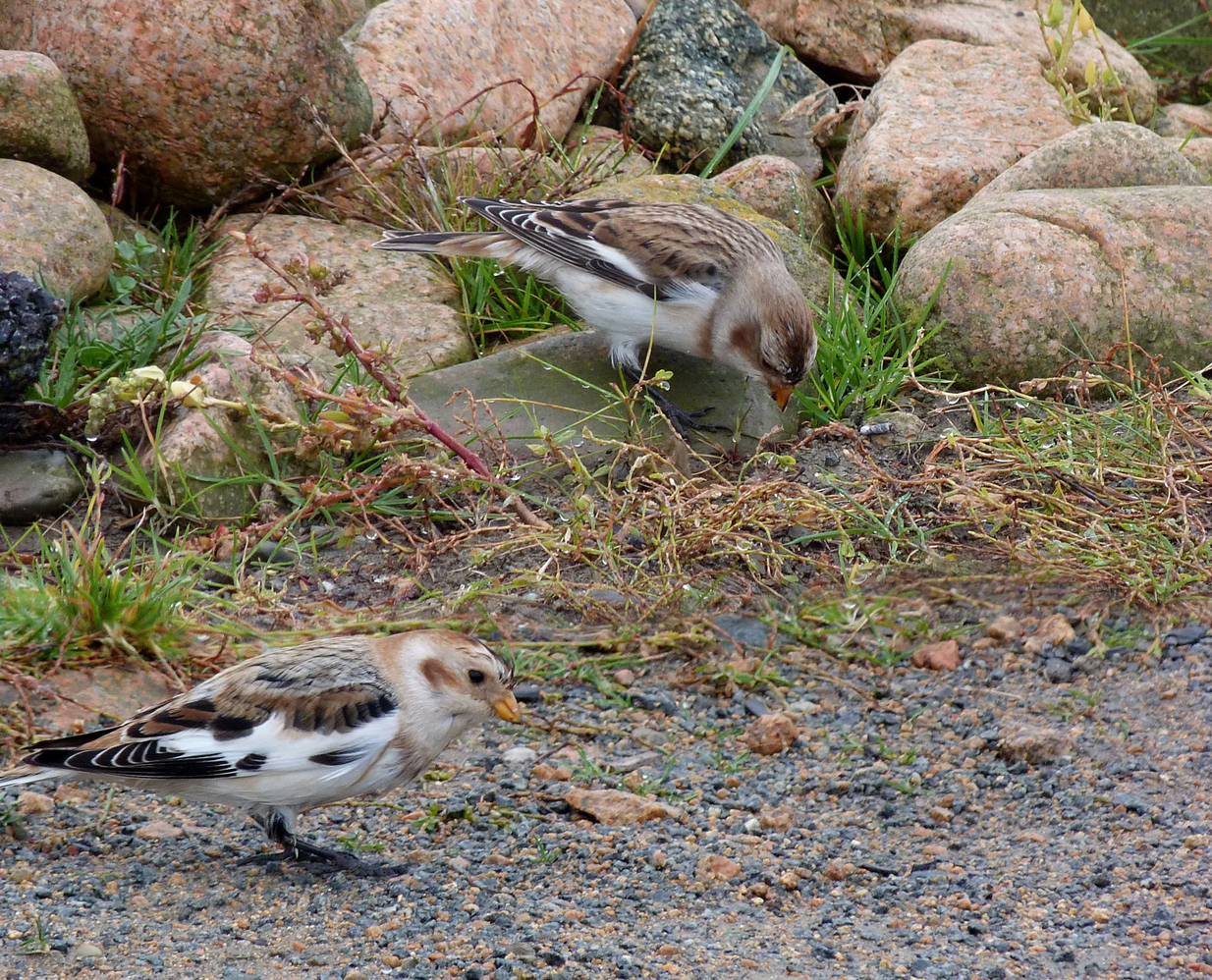