The idea behind booking a birding holiday to the UK in my half-term holiday in the last week of October is that I will see some rare birds. The presumption is that there is BOUND to be a couple of top-notch rare birds around at that time of the year and I am BOUND to get one or two ticks. A while ago, I used to have this week in Scilly where the plan would generally work. I have seen plenty of stuff on those trips in the past. However, recent changes to travel scheduling has meant that it is nigh on impossible for me to get there from Guernsey - which, to be honest, is probably a good thing since it was becoming a ridiculously expensive trip. So instead I have been sticking to the mainland and have been willing to drive a reasonable distance to the mega-rares that will be turning up in this rarity-spattered month.

So, the theory sounds fine, but recent efforts have been beyond poor - Cornwall 2007, Yorkshire 2011, Norfolk 2013 - the only sniff I've had of a tick on any of these trips has been the Semi-p Plover (whoop-pee-do..), and the supporting cast of other rare and scarce migrants have been non-existent. This year I vowed to give it one last chance. If it was no good in 2015, I would not 'do' the October half-term ever again. So on Sunday 25th October I took the plane to the UK for 5 days birding, based in Yorkshire. Tick or die!!!

With seeing rarities being the priority, it was of interest that on the Saturday afternoon before setting off, a Bufflehead appeared on a lake in Cumbria. "It was of interest" of course indicates that I was far from excited or "pumped" at the news because, as with all wildfowl, I didn't know if it had flown the Atlantic, or flown over a garden gate to get there - the ugly head of 'cage-hopper' rearing up. However, no-one had had any indications that it wasn't wild, and so it was a case of "I suppose I'd better go and see it then".

So arriving at Manchester Airport around breakfast time, I got the news that the Bufflehead was still present, and so my plan was to head North up the M6. My enthusiasm was a bit strained to be honest and it was a bit of a relief when, just as I was waiting to collect my hire car, Ian and Andy texted me to say that it had a bright yellow ring on it! I'd already seen one plastic Bufflehead at Hornsea many years ago, and I was more than elated that I hadn't driven all the way to the Lake District and seen it already. Unfortunately, there seemed to be no other birds in the North that I especially wanted to go see, so I had a relaxing afternoon at my parents' house in Leeds, ready to hit the coast the next day.

Monday 26th October : Up very early and off I went, driving East along the M62 towards Spurn. I was excited as I hadn't visited Spurn for over a decade, where I had done some terrific birding when I lived in Yorkshire. Even way way back, when I first started birding properly, on 17th Sep 1989 me and Dad spent a couple of hours in the afternoon there and saw 2 Barred Warblers, 2 R-B Shrikes, a Rosefinch, a Little Bunting and a Greenish Warbler! Then there was a spring day in May '95 when I went to twitch my first Subalp, before jamming into flyover White Stork and Black Kite - a 3-tick day. Then later in the same year, on 19th Sep, when I counted 135 Redstarts, part of a fall of drift migrants, and found a female Subalpine Warbler at Sammy's. I've had at least 15 British ticks in the Spurn area, so it held a lot of happy memories, although I suspected that I wouldn't recognise the place. 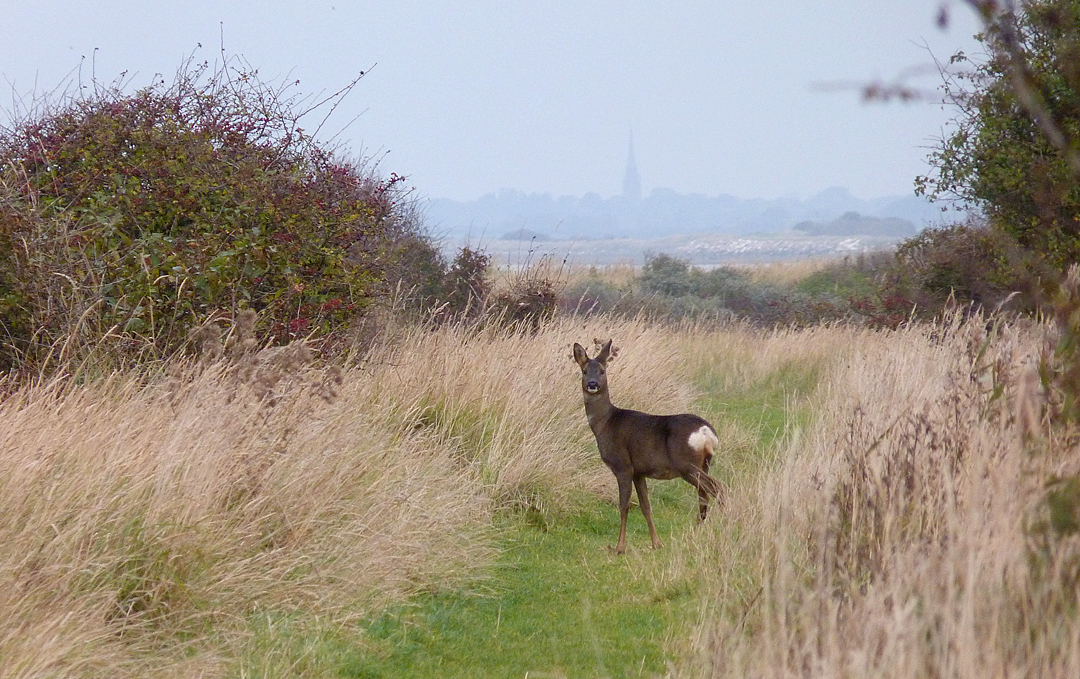 The plan was to get there at first light, but I didn't realise that the speed limit once you pass Hull rarely strays above 30. I finally arrived, parked up in the last car park before the gate and went for walk round the Kilnsea area. There was nothing especially rare seen the day before, apart from a fly-through Pallid Harrier which I didn't expect to be around still and the long-staying AGPlover which I would look for later.

I walked up the canal in very dingy conditions and noted that there were plenty of Reed Buntings and Goldcrests in the bushes, and a spattering of thrushes in the grassy areas, with the odd Skylark moving through. Reaching the corner at Kilnsea, a Black Redstart was sheltering and a Chiffchaff was calling but there was not massive numbers of late-autumn migrants. The tide was well out but I could still pick out various waders feeding on the mud including a few groups of Knot. Walking back east along the road there were more Goldcrests in the hedges and lots of Blackbirds, with a single Mistle Thrush showing well.

I headed up Beacon Lane without seeing much new and then back south along the beach. I had a few looks out to sea but I didn't fancy doing any seawatching, then continued back to a cafe for a splendid snack. Nearby a couple of Stonechats fed in the fields along with a few Fieldfare and Redwing. So not much variety, but I was having a nice time and I headed south onto the peninsula. Of course, the last time I visited Spurn I drove down to the end of the point in the car. That was before the storm surge that turned Spurn Head into Spurn Island. South of the Warren I looked out to a new landscape, where a beach had replaced the solid land.

The breach at Spurn and the new 'Spurn Island' 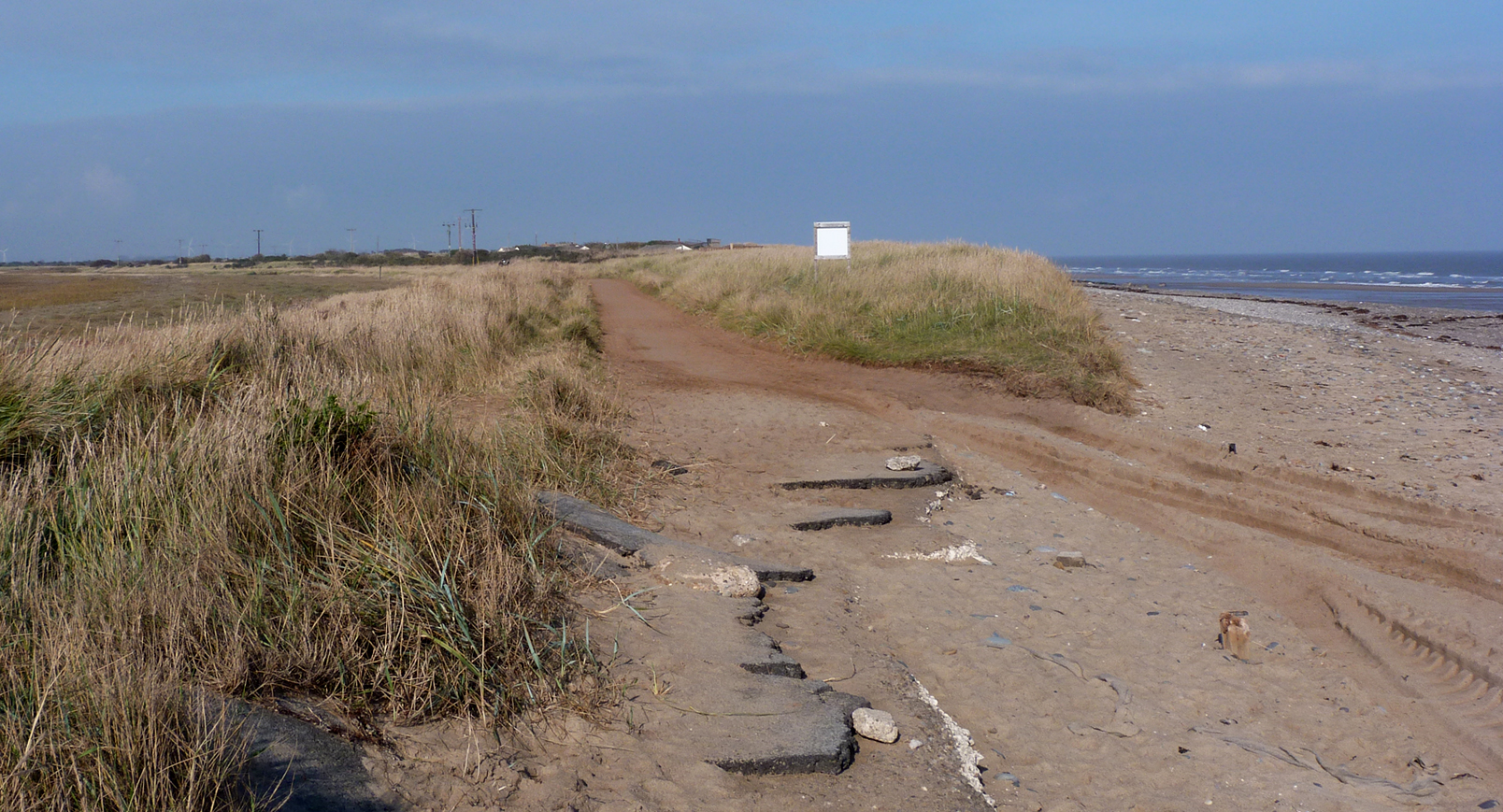 The end of the road.

Turning round and heading back North, a flock of 8 Brambling flew right past me really close and dropped down in the bushes near the Obs. This was at the 'narrow neck' where the visible migration watches happen at Spurn and, even though there was just a few things moving today, you could see how great it must be on a big day. Most things seem to pass very close and very low. Back near the car, someone informed me that a Pallas's Warbler had just been discovered but I searched and searched the bushes to no avail.

I thought I'd head up to the 'Kilnsea Wetlands' area to look for the American Golden Plover. I had never seen these new wetlands before - they did not exist when I lived in Yorkshire. I was expecting a couple of small pools, but when I looked out of the hide I was amazed at the huge size of the scrapes. There were not many waders on the lake but I suspected it was because it wasn't high tide yet, but I did find the juvenile American Golden Plover asleep in the distance. It could hardly be said to be showing well, but at least it was quite a rare bird and was a Yorkshire tick for me.

It was now into the afternoon and rather than head back towards Kilnsea I decided to have a walk along Sammy's Point since the tide was now coming in fast. In the horse paddocks at Sammy's there were 100+ winter thrushes feeding, about half-half Redwing and Fieldfare, along with 100's of Starlings. Another Black Redstart was amongst these and Goldcrests called from the hawthorns. A couple of Goldcrest decided that feeding on the saltmarsh was a suitable thing to do. At the far end a Merlin suddenly dropped in and sat up on a bank. Due to the bushes being in the way it didn't see me and I was able to stalk it quite close. It had prey so I suppose it was waiting to eat it, probably disgruntled that I was trying to take its photo. As I climbed up the bank back onto the sea wall I was surprised to see the water had raced right in, and the mud-feeding waders were now piling past overhead. 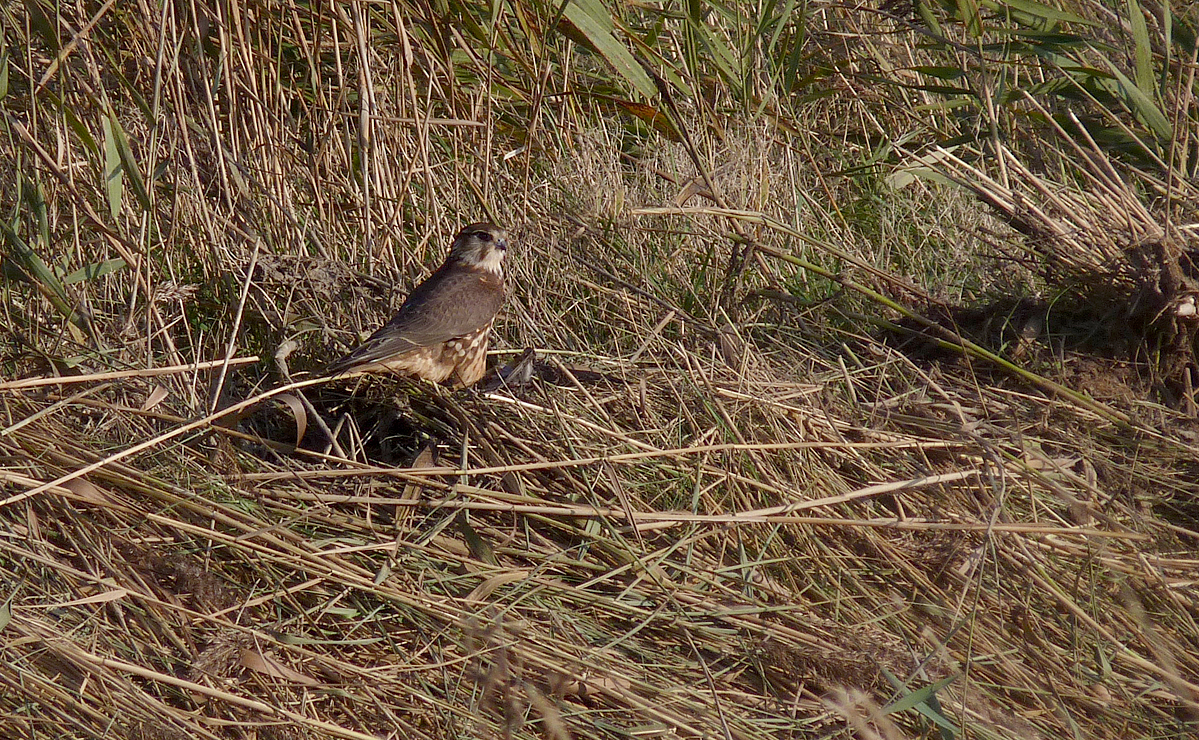 Looking at the time, I decided that it would be beneficial to head back to Leeds, to get past Hull before the rush hour. I didn't realise that the Pallas's Warbler had been showing during the afternoon right next to where I had parked the car earlier - d'oh! But I was pleased with an enjoyable day out in the field in pleasant weather conditions.

Along the beach at Kilnsea I walked amongst the debris left by the sea where it had eaten away at the soft coast and thus eaten away at the edges of the village, gradually reclaiming the land. Concrete blocks, eroded bricks and twisted iron were strewn around the sand like something out of an post-apocalyptic film set. Giant slabs of concrete stuck out of the sand as though an alien space-craft had crash-landed in Yorkshire. A stark message of the power of nature. 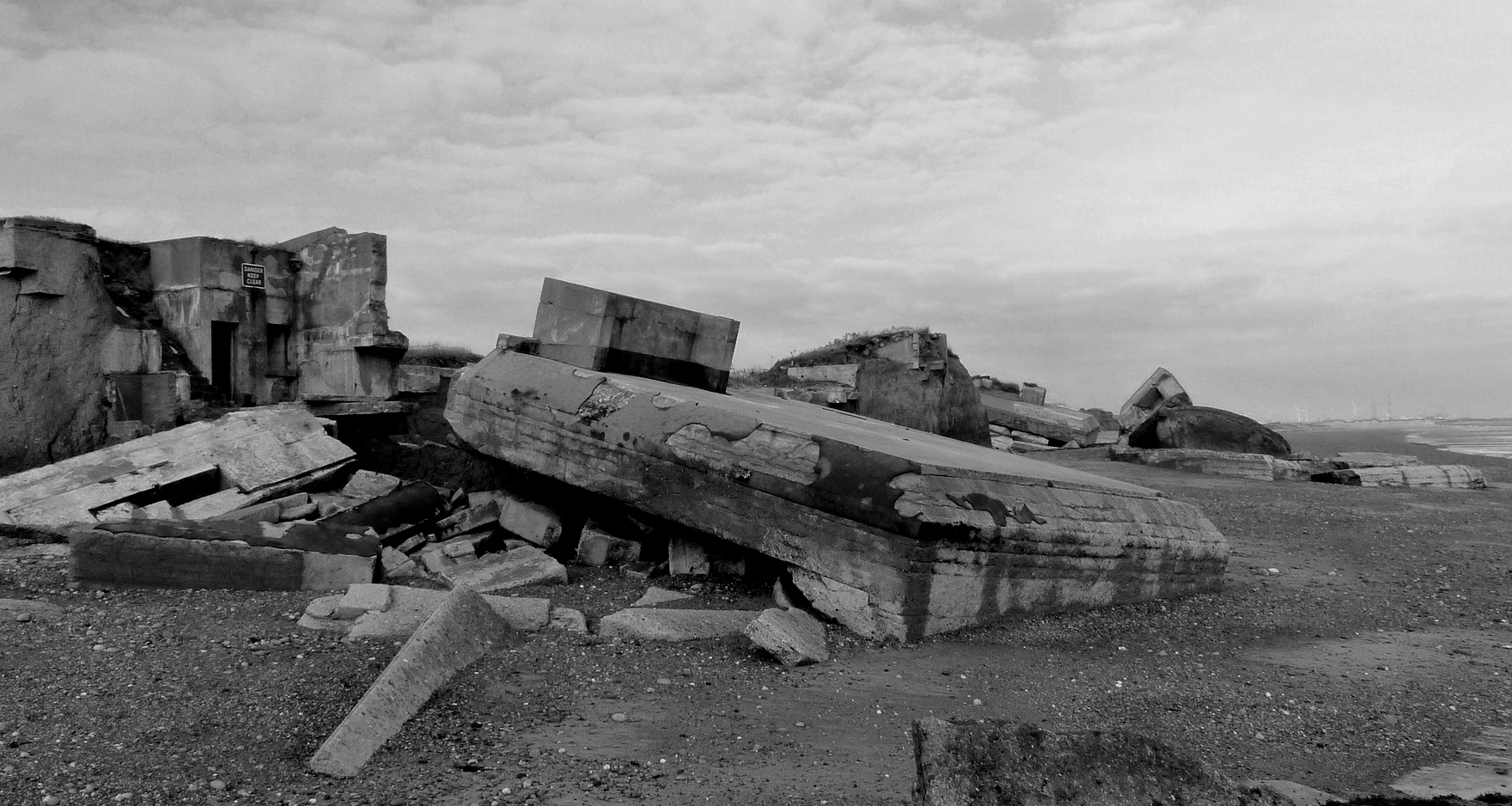 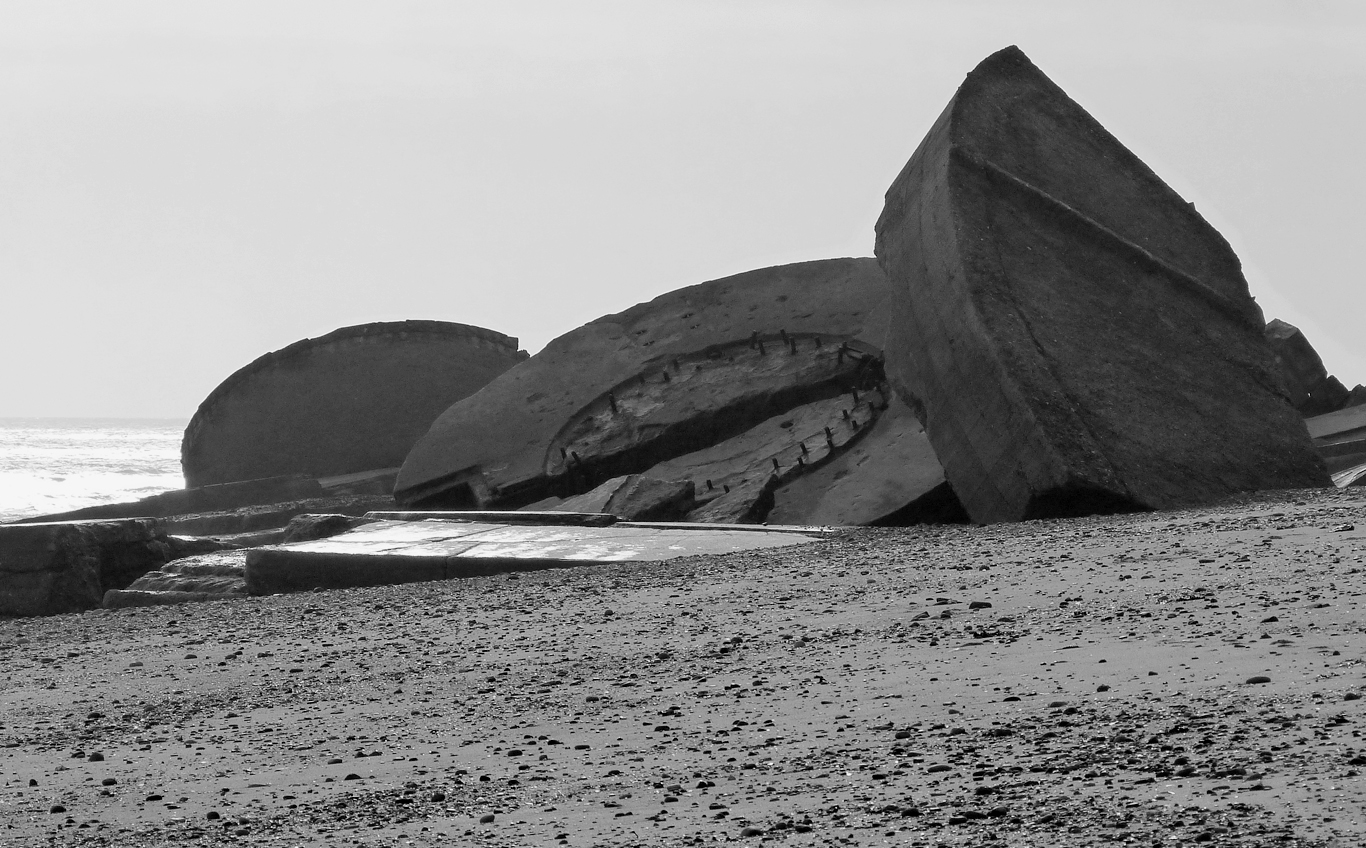