Tue 27th Oct - With nothing exciting turning up within reach and with my lodgings near the east coast unavailable until the next day, I decided to keep it local and head down to the old patch, Swillington Ings for the morning. It was a dingy, dismal day with dank mist and drizzle hanging in the Aire Valley. I walked around the hedges and plantation and saw a selection of common winter species. A flock of finches by the canal bridge contained two Bullfinch and three Redpoll. These were the first Redpoll that I have seen at close quarters for years - something so familiar that seemed so delightfully unfamiliar.

A wet and dank day by the Leeds-Liverpool Canal, Swillington Ings

I was joined by my sister and nephew, and we went for a walk around the reedbeds. Of course, at this time of year, there was not a lot of activity but we did hear a calling Cetti's Warbler. At the central watchpoint I set up the scope and we saw a few Pintail amongst the duck flocks and lots of other birds on the lakes - a lot more than I usually see anyway. I then caught a glimpse of a Kingfisher zip across the path and head into the reeds. I was desperate to get the 'scope on it so that my nephew could see it really well and I managed to spot it on a stem further up the channel. Then, just as I managed to get it into focus, a bloke on a mountain bike whizzed past and off it flew!

Such a shame, and I cursed the geezer, complaining that biking shouldn't be allowed on a nature reserve! But, thinking properly about it, that's clearly how this reserve has been designed. Along the tracks there were bikes, joggers, kids on scooters, mums pushing push-chairs, dog walkers and toddlers squealing. The key to conservation is getting the general public more connected with the natural world. If they are introduced to nature via their other hobbies then so be it. If they begin to appreciate what we have, then they are more likely to support conservation. I waved goodbye to my sister and had a nice relaxing walk back, enjoying Coal Tits, Reed Buntings and Jays along the riverbank. 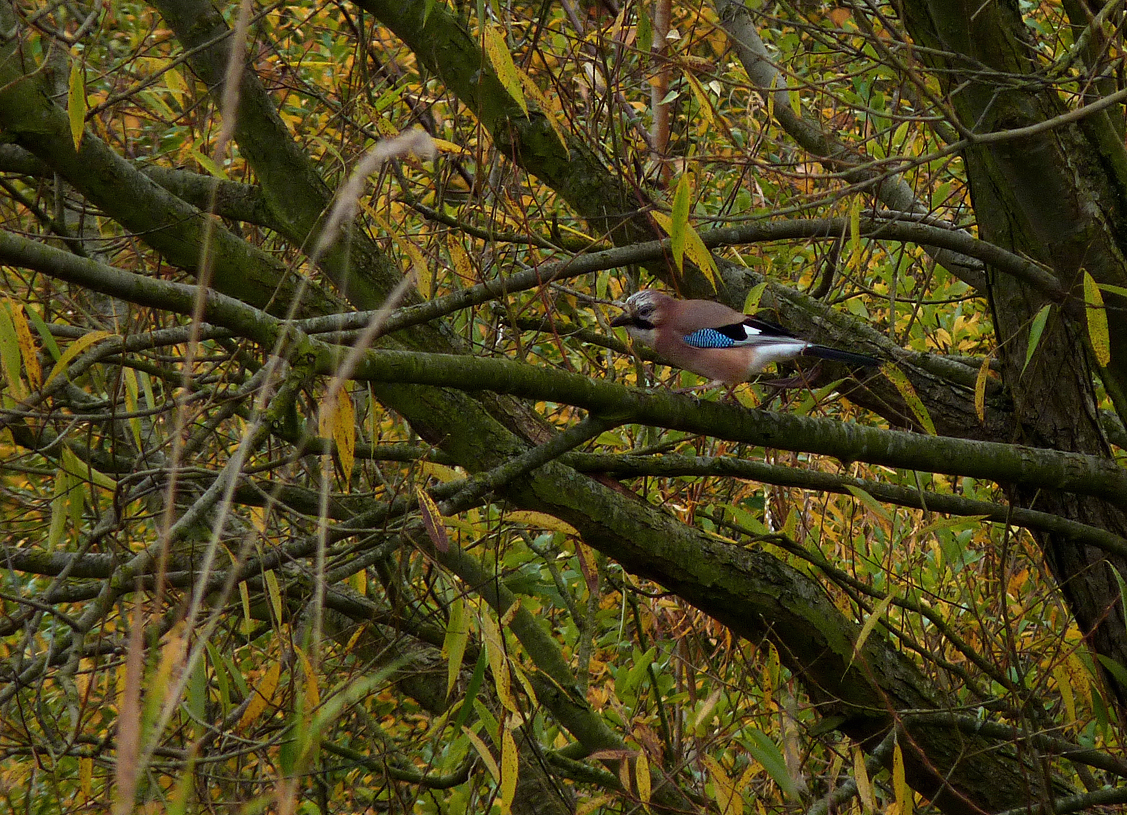 I considered having a wander around some other sites but I decided that a rest back at the house would be better (lazy!). I checked the web late in the afternoon and saw that a Hume's Warbler had been discovered at Flamborough. Excellent - a species that I had never seen before and exactly where I was planning to be in the morning!

Wed 28th Oct - I set off from Garforth before first light and headed East towards the Yorkshire coast. It was far from ideal driving conditions and by the time I climbed up Garrowby Hill onto the Wolds, I was driving through dense fog. Luckily, it wasn't too bad as I reached the mighty white cape of Flamborough and I soon found the bush where the Hume's Warbler had spent the following evening. There were a handful of birders waiting for it to wake up and I wandered round the clifftop in the faint drizzle of early morning.

Flamborough Head clifftop - the bush to the bottom right was the bush that had the Hume's Warbler.

There was no sign of the Hume's, but in the dark and dingy conditions it felt that it may still wake up and come out later in the morning. After a while I wandered around the area a bit and saw a Black Redstart on the lighthouse wall and found a Firecrest along the nearby hedge, which showed to just a few feet. I kept returning to the bush but pretty soon I got very bored and decided to do a circuit and return later. I headed along the south side of the headland and started north along old fall hedge. There were plenty of thrushes around, especially Blackbirds, and the weather was getting a bit better.

Then a guy passed by saying that the warbler had just been seen! So I hot-footed it back to the spot, walking very very fast and totally knackering myself out. Apparently, it had just flown up over the clifftop towards the very dense patch of bushes by the car park, and was not showing. Humph! A group of us kept vigil for ages but apart from someone saying they'd had a couple of very brief sightings there was not a sniff. We all saw something sneaking through the undergrowth towards us and momentarily thought we had it, but another Firecrest popped out in front of us. All this time, the drizzle was turning to rain and gradually we all were getting soaked. I became very annoyed and uncomfortable and eventually threw in the towel (not literally - that would not be appropriate birding etiquette). I retired to the cafe for a fried breakfast and a cuppa. The weather got worse and worse as I sat staring out of the window, and I drove away back to my sister's place on the Wolds, planning to try again tomorrow.