Up early and keen to get in the field on 29th Oct, I headed back to Flamborough again. The poor weather looked like it was covering the whole county apart from the extreme coastline and so I thought I'd better give it some welly before the inevitable gloom set in. I thought that there was a small chance that the Hume's Warbler would get re-found but I'd let someone else do that whilst I went for a walk. I headed straight inland so that I could be one of the first to walk Old Fall hedge. There were quite a few birds flying round the Head area, mainly thrushes as yesterday. I rounded the corner and popped through the hole in the hawthorn bushes and was greeted with a fearful wind blasting into my face from the south. The famous walk between the field and the hedge was not easy-birding!

There was not  a large variety on species on offer in this area, just a few Goldcrest sheltering from the wind and various thrush species feeding on the ground along the field edge. A few Skylarks and Reed Buntings further into the fields, and further still, small groups of Grey Partridge and Roe Deer. The only truly sheltered spot was on the north side of the plantation, but I couldn't find anything new there.

I thought that the south cliffs would be too blown out and so I retraced my steps back up the hedge to try the gardens and open areas adjacent to the road. The golf course was peppered with Redwings, Blackbirds, Fieldfares and Pied Wagtails, plus a Black Redstart feeding on the turf much closer. There were a few flocks of Tree and House Sparrows and common finch species in and around the gardens and I was very pleased to find two gloriously orange Bramblings, probably new in, feeding on the grass. 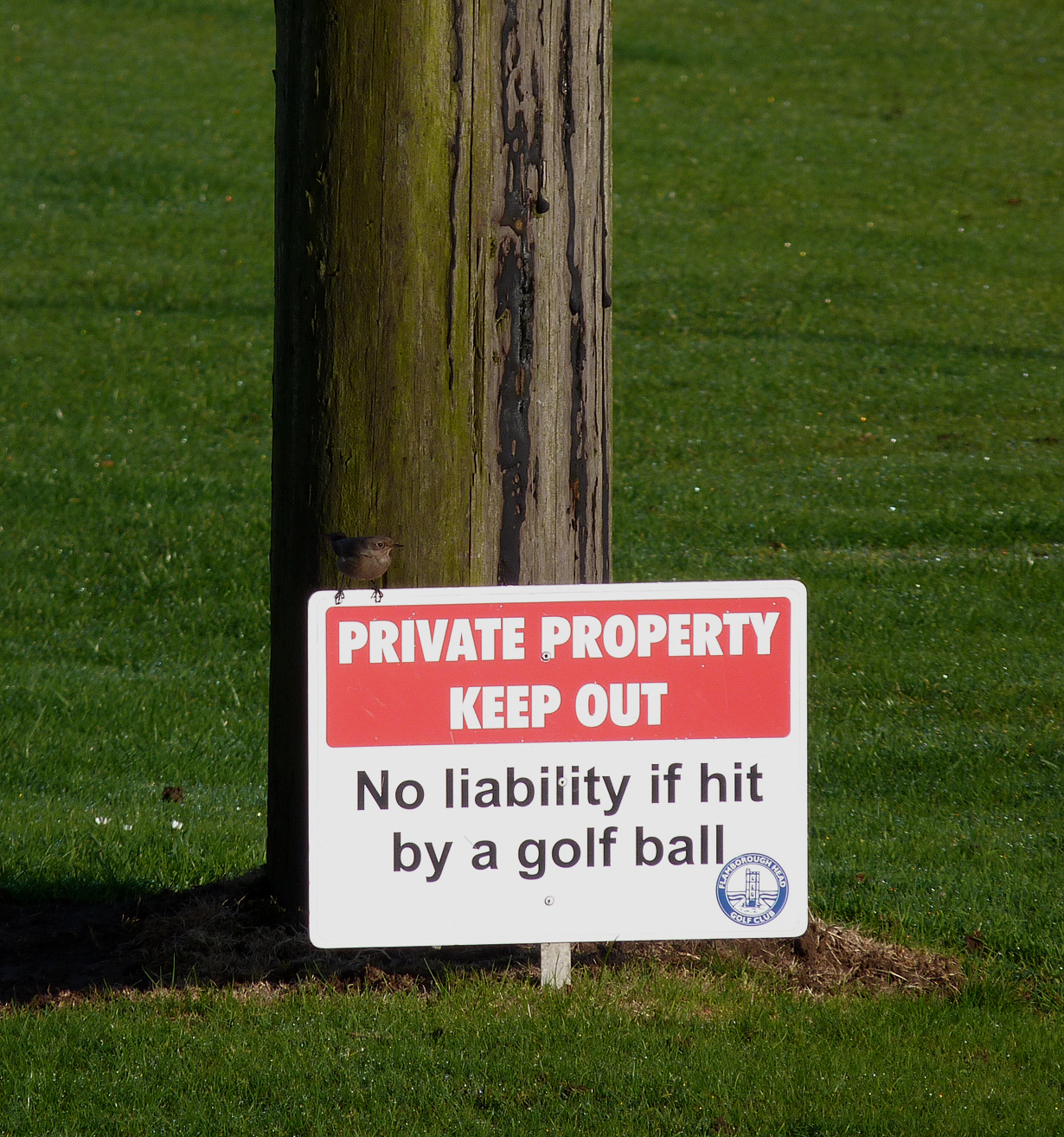 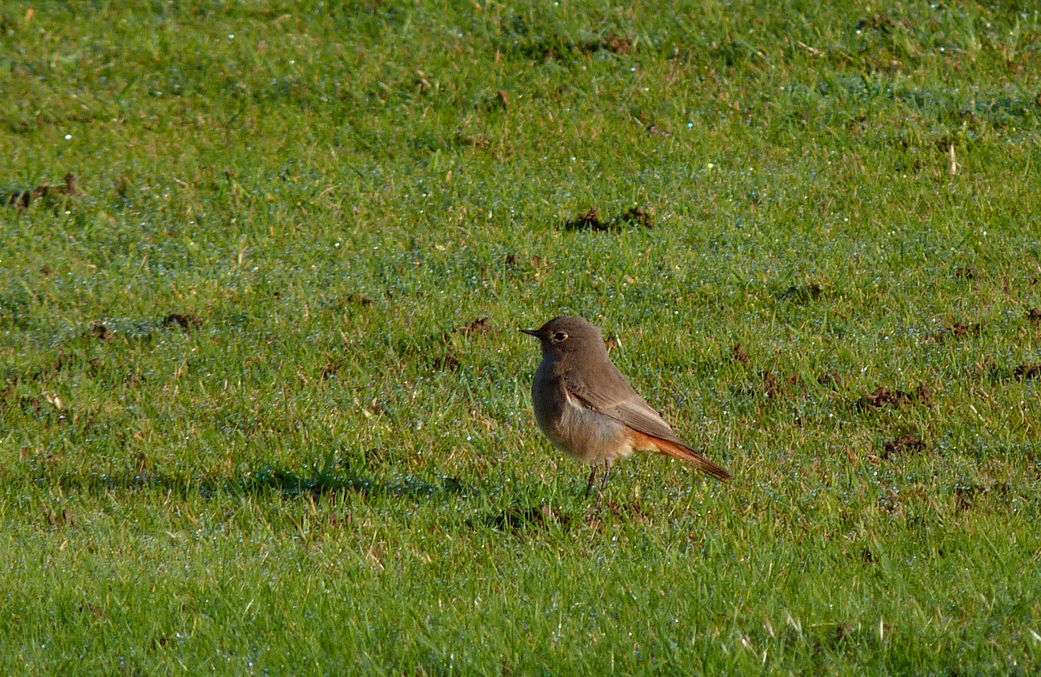 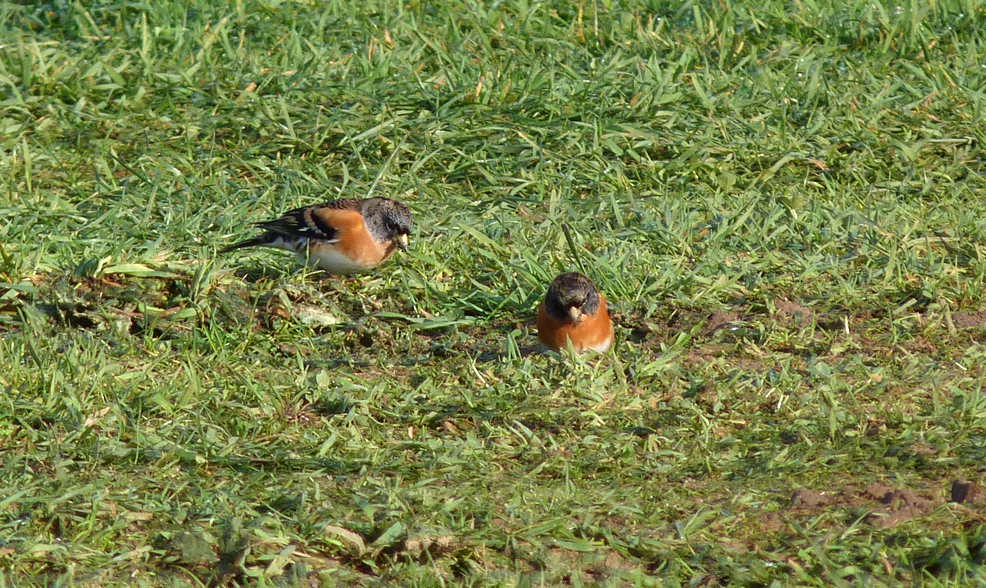 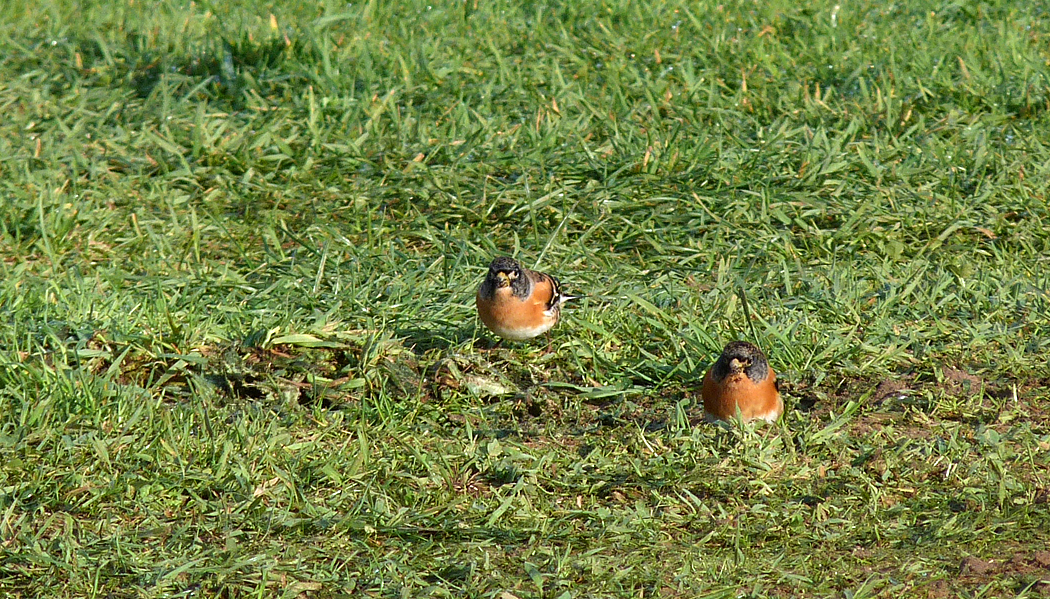 With nothing new seen around the Head, I thought I'd try South Landing where there'd be a few sheltered spots. The tit flocks there did not have many hangers-on, with very few crests visible, although I did enjoy watching Coal Tits and Treecreepers. I considered that it would be a good time to try and memorise some of these unfamiliar calls, but within a couple of hours I'd forgotten what they sounded like. I have no memory for sounds at all - I just cannot 'hear' things in my head. Even though I can see almost exact pictures of birds in my imagination, I cannot keep sounds in there. I thought there was bound to be a Woodcock in the trees so I stepped a few yards into the leaf litter to find one. Just  ten paces into the trees I flushed one and it flew across the valley. I suspect that there were many recently-arrived Woodcocks that day in amongst the headland's trees. 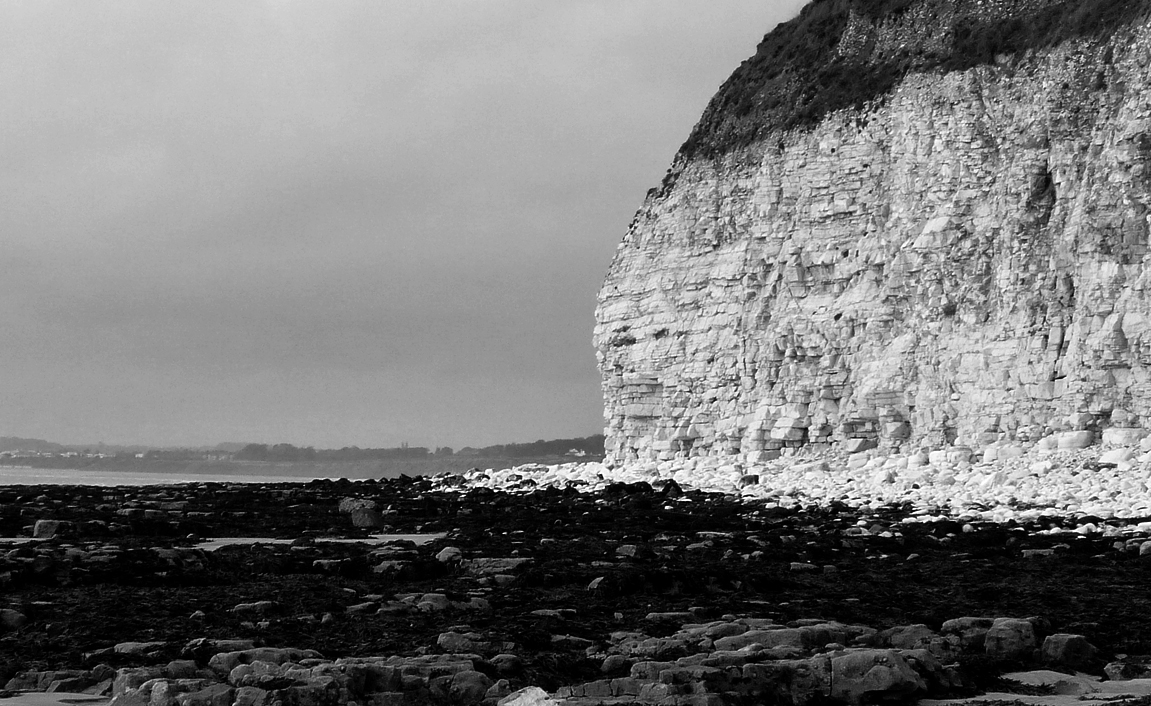 Just as I was returning to the car park, the weather set in and the rain started to fall. I drove to the north side of the headland but it was even worse there and it didn't look like it was getting any better. I drove to Dane's Dyke as I knew that it was wooded there and so I could shelter under the trees, but there was little different present than was at South Landing, including another Woodcock. With the awful conditions, I headed back to the house after a particularly hairy drive down the country roads with standing water in every dip and not as much slowing down as I'd have liked.

Waking up on Friday 30th Oct, there was very little change with miserable rain and gloomy clouds hanging over the rolling wolds. It wasn't as bad as the previous afternoon, but I just couldn't drag my sorry ass out into the field! I had zero enthusiasm and consoled myself with Nicola's pancakes instead. When the weather brightened up and I had checked that nothing had turned up on the coast, I drove back inland to Leeds.

Autumn colours on the Yorkshire Wolds

I was considering just veggin' out for the afternoon at my parents' house but news of a Great White Egret at Fairburn Ings got me off my backside and I headed down there for the last couple of hours of the day. Walking down towards the Lin Dyke hide I caught sight of something odd circling high over the marsh. I thought it was a late hirundine at first, but when I got it in my bins it was a bat! It was actually quite high and difficult to photograph and kept disappearing behind the trees, but I got a few record shots. I think it is very probably a Noctule Bat - maybe. 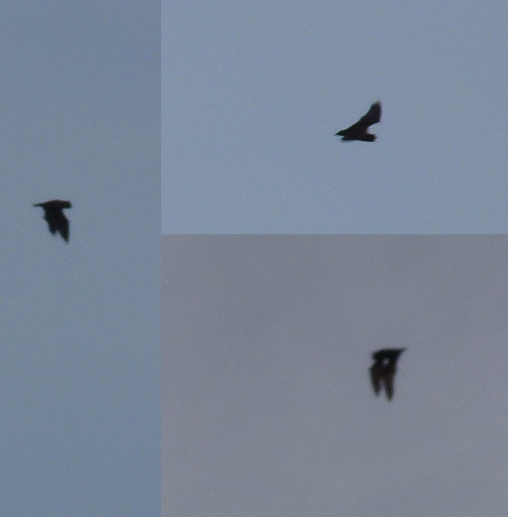 Whilst watching the bat in the bins, I was suddenly shocked when something swooped and had a pop at it! I soon saw it was a Peregrine which then came to perch on the power pylon above me. Not something I'd ever seen before, a bird of prey having a go at a bat - probably the highlight of the trip. Apparently, reading up on this, Peregrines do catch plenty of bats for prey, but I suppose they'll do this more in certain parts of the world than others. I wouldn't have thought it was a very common thing in the UK. This Peregrine probably got the shock of its life, sneaking up on what it thought was a tasty bird, then getting close and seeing this ugly critter in front of it. It's probably going to have nightmares. 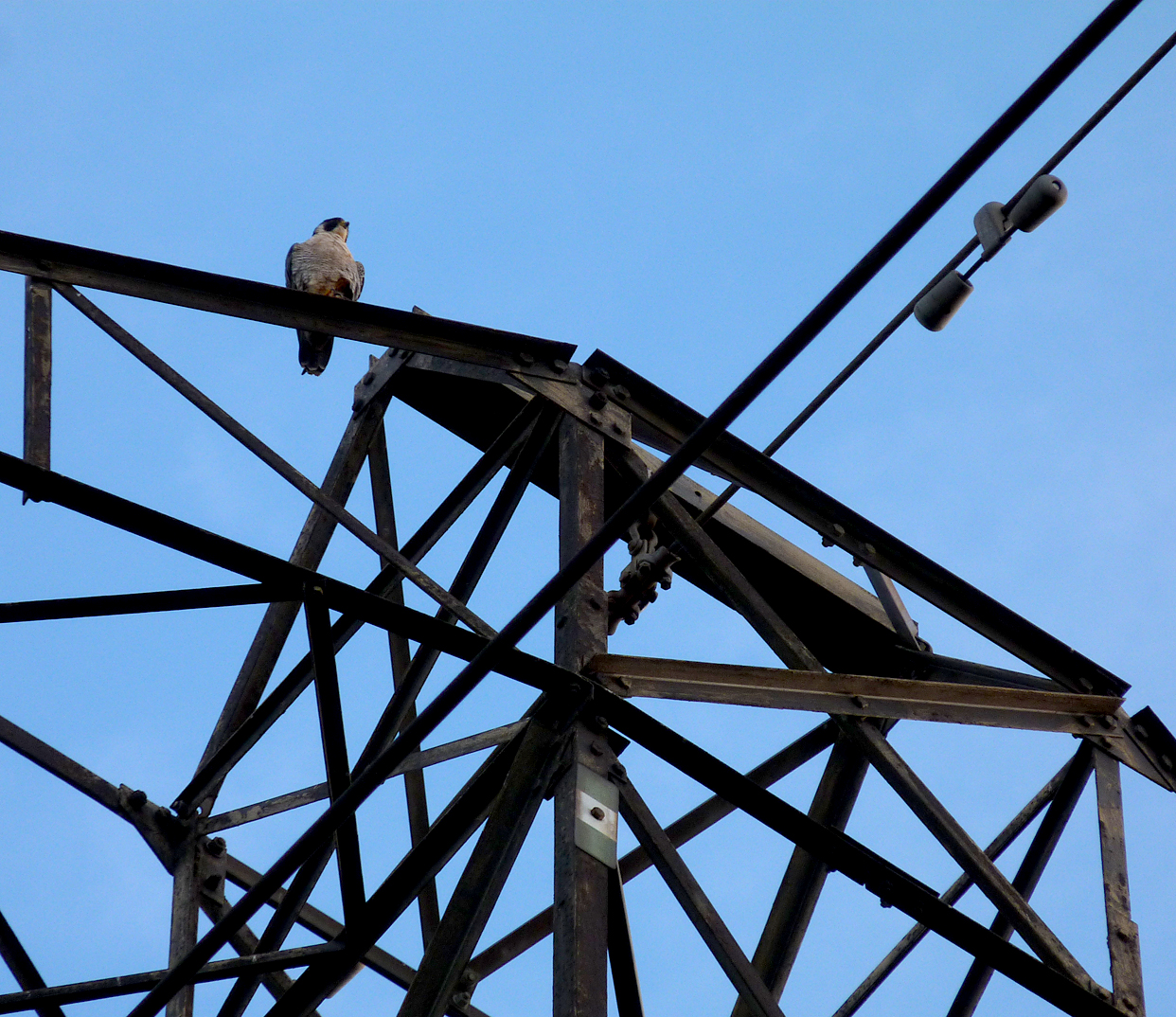 Looking out from the hide there were a few Little Egrets but no sign of the Great White - hardly a surprise! However, a guy had a phone call which let him know that it had moved onto the part of the reserve called 'The Moat'. I knew where this was and hurried down there, parked on the roadside and peeked over the wall. Straight away the Great White Egret flew up from the closest bit of pond and headed off towards the direction I'd just been - flip! It was getting rather dusky now and I didn't fancy slogging it back down there again, but luckily it stopped in its flight and perched in view on a small tree where I could see it very well, albeit not very close. A Yorkshire tick for me! 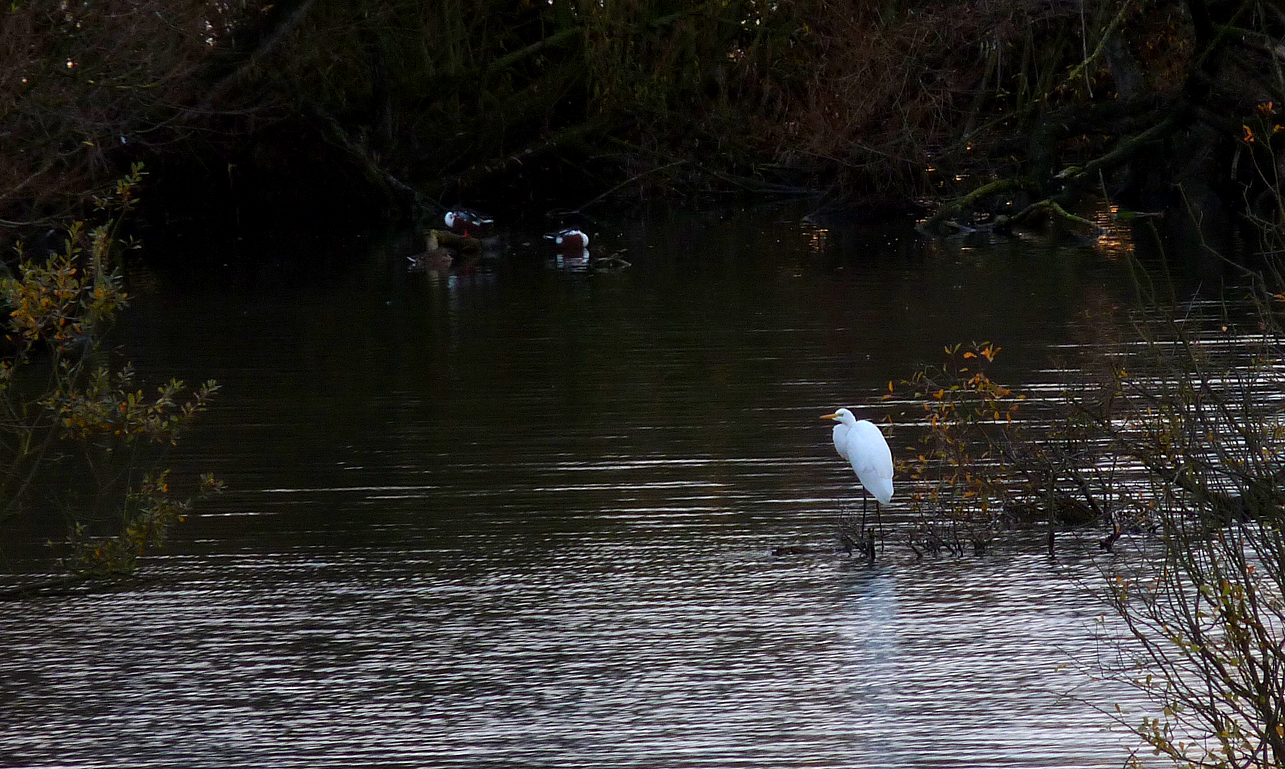 The next day I was up at five to catch an early flight back to Guernsey. As I was sat in the departure lounge, I received a text message - 'Pallid Swift at Flamborough' - absolutely bloody predictable. This made my mind up - no more October rarity-hunting trips to the UK. I'd given it a final chance and it had failed in its mission to find me ticks. October half-terms will now be spent finding rarities in Guernsey rather than twitching rarities in the UK. What could possibly go wrong......... 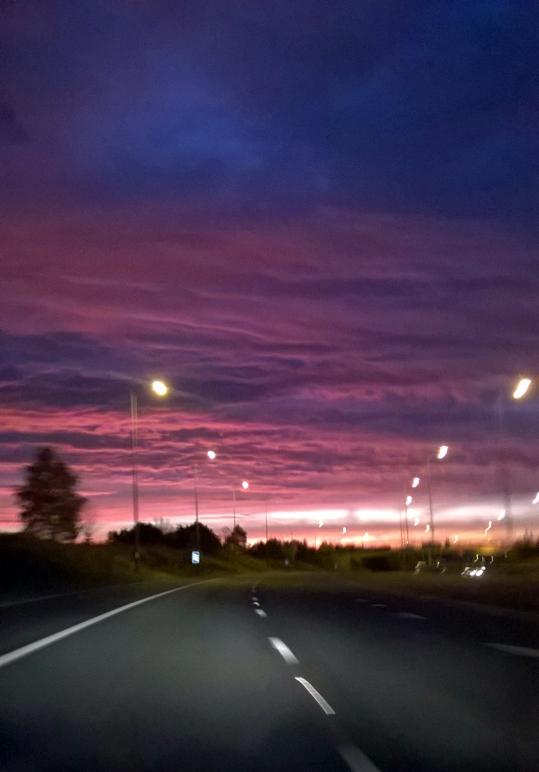