With the weather breaking big time during the last couple of weeks, with storms and winds and rain, punctuated with nice clear spells, it has really mixed everything up and a few nice things have been seen around the island. Most of these were ungettable for me for various reasons. Last weekend was exceptionally wet and there were a few massive downpours. On Saturday, the road outside our house became a small river temporarily, which I have never seen before. I have just bought a new, very small video camera, about the size of a mobile phone. Here are some results from it, which look very promising.

Video recording of the small river outside our front gate on Saturday morning. It went as soon as it appeared.

After the deluge seemed to be stopping, which was around Sunday lunchtime, I decided to head out in the field, especially as the wind had been from the East also. My first stop, at Fort Hommet, revealed that there had been some kind of arrival as there were 4 Whinchats together in the car park. I also found out that the rain wasn't stopping at all, as it started to pound down again! 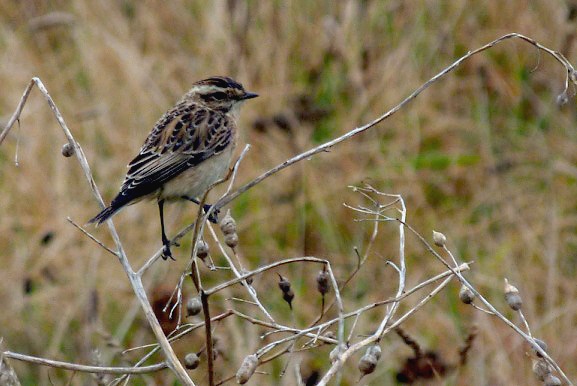 Where to be when it's raining hard? In a hide of course. So I headed down to Claire Mare hoping for a good grounded wader, but all there was was a Common Sandpiper. After a while, I watched two Water Rails chase each other across the pond and just behind them I caught a glimpse of a movement in the reeds. It took a while longer but eventually a Jack Snipe wandered out. This was quite a surprise being so early in the winter and may even be the earliest record for Guernsey - I can't find any before 24th Sep in the records. The strong northeasterlies no doubt scooping it across from Scandinavia faster than usual. After this nice find, I continued on to search the L'Eree area where there was a nice selection of species, with another uncommon wader - a Knot on L'Eree beach being the pick.

adult Yellow-legged Gull - L'Eree beach, 23 Sep 2012. The surrounding LBBGulls are showing their variability, with at 7 and 8 o'clock to the YLG what are presumably British birds, and at 9, 10 and 11 o'clock what are probably Scandinavian birds on their way south (slightly darker backed, smaller, pointier-winged, different leg tone?) but racial ID is notoriously difficult.

I moved on up to Pleinmont where there was not a great deal in the now worsening conditions, but another 4 or 5 Whinchats were present. As I was getting wetter, I headed back home, and calling in at Vazon on the way, I found another Knot and a winter-adult Curlew Sandpiper. I am sure there will have been a wider selection of migrant waders on the island if I'd have been able to check all the sites. 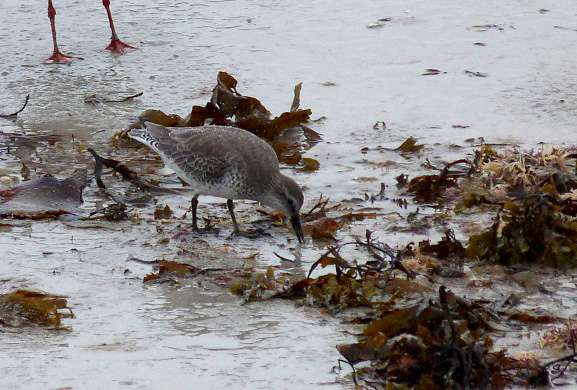 The tramping around in the wet clearly meant I caught a "chill" (whatever the heck that's meant to be) and suddenly I got sick and had to take a couple of days off work and a few more recovery days meant birding was curtailed. Back in the groove, I went out for a few hours around Pleinmont this morning but we were disappointed by poor numbers of migrants. The first 4 or 5 Firecrests were the highlight, but they are expected at this time of year.

And that was September. It passed without a big rarity for everyone to see on the island. Tomorrow is October and the expectation is turned up to 11. Is this the year? Is it? IS IT?