The first week or so of November can be excellent for birds, but it is always a bit of a come-down for me. Firstly, it is not October - beloved October. And secondly, I am always back to work after a week-off full of birding. And it's been quite miserable and dark and gloomy this year too. So I have not managed to see many interesting species.

That is apart from one. A shining light in the last dark throws of Autumn. I finally ticked Woodlark for Guernsey! Sherlock Holmes had Moriarty, I had Woodlark. There has been a massive increase in sightings here on the island in the last few years, and now probably double-figures get seen in late autumn every year, but I seem to miss all of them. I have trudged round Mont Herault fields always a day, or even an hour too late, numerous times. I have raced down to Rue des Bergers, and up to Rue des Hougues only to find that the birds have just scarpered. And as, unusually, none had ever been photographed, I was beginning to think that this was some kind of  massive practical joke.

But, on Wed 7th, a flock of 6 birds were seen in the fields at Rue des Hougues, and were actually photographed. They did exist! Thursday lunchtime I sped for a quick look but failed again, even though they were seen later in the day, and on Friday also. So on Saturday morning I was determined, and despite the pouring rain, I knew that this would be the day. Armed with Wayne's detailed instructions as to their favoured field, I pulled up in the car and scanned across the short grass. After a few finches and thrushes, there, at the back of the field was a fine Woodlark. Score! There were a few of them feeding in the grass but they never showed very well. After a short while something spooked all the birds and I watched and heard them fly.

Woodlark calls, Rue des Hougues, 10 Nov 12 - I just managed to record a few contact calls as the birds flew up from the field.

Fifteen minutes later, Mark and I watched them reappear and fly around a couple of times and we counted 6 birds in the flock, but they soon disappeared and as it was raining I didn't hang around. There were lots of other birds here - it is amazing how well these seemingly anonymous fields in the middle of the island do for birds. They are quite large, and relatively open, but also I think it helps that they are on the very highest part of the island.

Some other sightings have included a close but brief Woodcock flushed from the path at Marais Nord this morning, where there was a really nice Firecrest also. Hopefully the weather will gradually get colder and colder and push birds in from the continent during the next couple of months. Warm winters here can drag somewhat birdwise!

Cosmopterix pulchrimella - garden, Oct 2012 - these tiny tiny moths are one of the very few on the wing still. They breed on the Pellitory growing in the garden and I have been struggling to get a satisfactory photo of one. But now with the new lens I consider this a success.

Sketch of the Red-breasted Flycatcher at Icart last month. 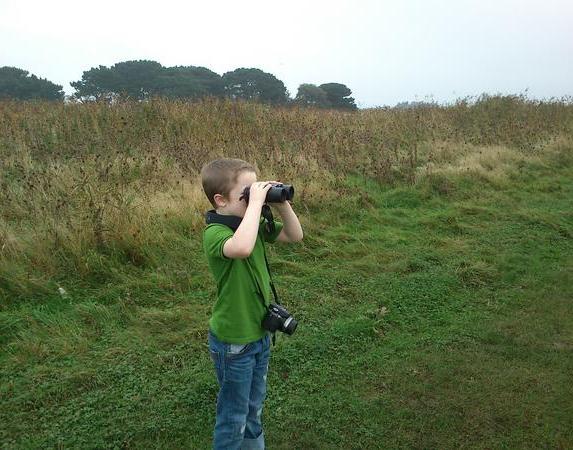 Aidan joined me on one or two birding walks in half-term. He seems to really like taking photos but has not shown too massive an interest in nature yet. It is difficult to know how hard to nudge him in the right direction (i.e. birding) but he's only just 8 years old and there's time. He has potential, as he has a good eye for detail, and a good memory, and terrific genes of course.

The most amazing sighting of the last two weeks though was this amazing "twister"! On 5th November I sleepily set off for work in the car and as I reached the coast by Grandes Havres, I looked to the north, and out-to-sea I saw a massive funnel coming from the dark, stormy clouds. I am pretty sure it reached right down to the water when I first saw it, indicating a waterspout. By the time I'd pulled into the car park at Rousse and got the camera out it had weakened and drifted behind Chouet headland but it was truly an amazing sight.